My kid was a sweaty mess, sitting on the couch, gulping down Gatorade and whining. He didn’t want to go home. I was kinda surprised, because my kid is such a video game addict that home is exactly where he wants to be most afternoons. What could possibly be more fun than Minecraft??

As it turns out, Sky Zone is way more fun than any video game my kid has played! We brought along one of his friends to the new location in Fenton to check it out. FYI: We received free tickets to review Sky Zone, but my opinion is my own.

First, you might be wondering what Sky Zone is all about. It’s a trampoline park, where kids (and adults) can come to jump around and have fun. There are several trampoline “courts” where the floor is covered in a grid of trampolines–and so are the walls! There’s a smaller court where they host dodge ball games, a court for slam dunking basketballs and cool place where the kids can jump into a pit of foam blocks.

Mitch’s favorite part was jumping into the foam block pit, but they had a blast roaming around the entire facility! We are definitely coming back! 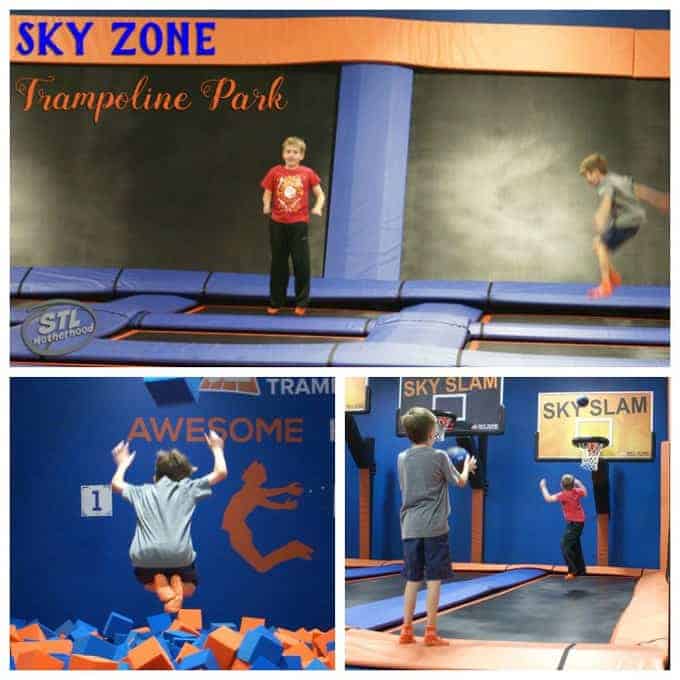 I was pretty sure Mitch would love Sky Zone–this was his first visit, but his big brother has been several times to the Chesterfield location. The other location is a bit of a haul for us, so I’m really excited that a new Sky Zone has opened right in our back yard–this is so much easier for all us folks on the south side of the metro area!

By the way, I have to point out that the Sky Zone in Fenton is run separately from the one in Chesterfield, so they may not have the same features, hours or pricing. Here’s the website for the FENTON Sky Zone.

I was surprised to find that Sky Zone doesn’t have any sort of size requirement. The staff sort kids by size and they keep them separate. So on our visit, Mitch and his friend (both 3rd graders) were designated as “B” jumpers and the staff kept them away from the teens doing complicated head over heel jumps. We visited during the soft opening, so there weren’t many jumpers and the staff had no problem keeping the little kids on one side of the court. On a busier day they can open another court.

The Sky Zone simply states that if you’re big enough to walk, you’re big enough to jump. Mom’s can NOT jump on the same square as a child for safety reasons, so use your best judgement. If you have a kid under 40 inches, you might want to visit during Toddler Time on Friday mornings! 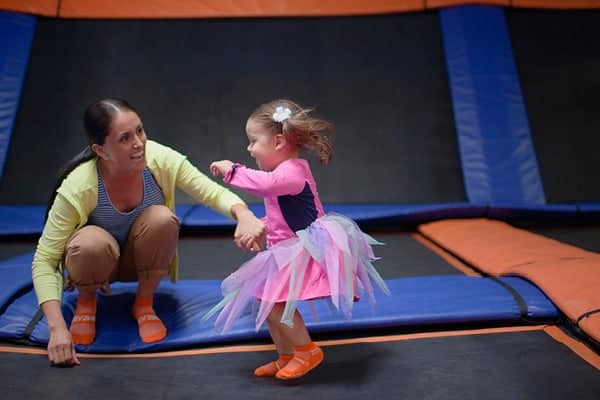 Speaking of safety, I really love all the precautions taken at the Sky Zone. There are safety videos running on big screens around the building, so my kid–a real stickler for the rules–already knew what he could and could not do by the time I picked up the tickets. And before they entered the jump zone a staffer stopped the boys and went over the rules in person. 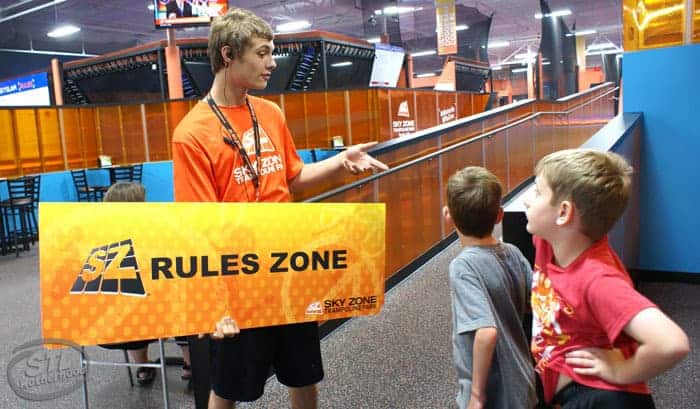 The rules are pretty simple, and include things like, nothing in your pockets and nothing in your mouth. (There are lockers to stash your valuables if you didn’t bring a mom to hold all your stuff.) They ask you not land on your head or do double flips. You know, stuff like that. You can check out the Sky Zone rules here. Also, you need to buy their super cool footwear to play at Sky Zone–grippy socks! They’re only $2 a pair, so just remember to bring them on your next visit. They come in Sky Zone orange and pink and tons of sizes. 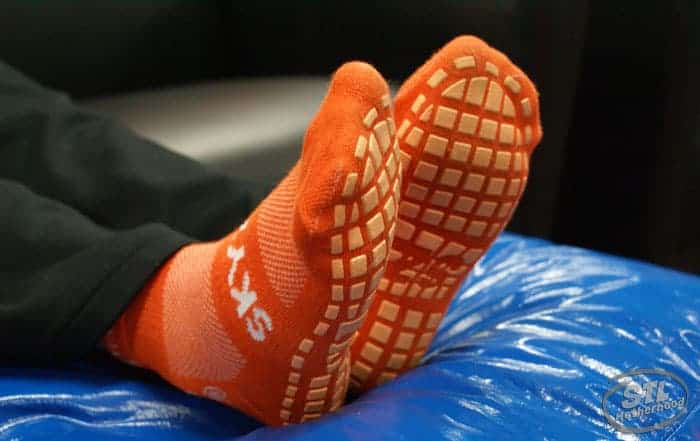 And while I’m on the topic of safety, know that the Sky Zone staff clean the place top to bottom EVERY NIGHT. The manager said they disinfect every trampoline, dust the nets and wall pads and empty the four foot deep foam pit to give it a good cleaning. Every. Night.

You can’t bring food or drinks into Sky Zone, but they do offer a concession stand. There’s also a lounge over looking the courts to have your snacks. This is also a nice place for parents of older kids to hang out.

Thinking of a birthday party at Sky Zone Fenton? You can bring in your cake or cupcakes and they’ll supply the pizza and soda. You’ll also get a separate party room with your package.

The ticket system is pretty slick. You buy jump time in 30 minute chunks (30, 60, 90 & 120) and your start and end time (along with your size category) is printed on a label–along with your first name. They announce the time every half hour so you (and the staff) know when you can enter and leave the courts.

There’s no need to make reservations at the Sky Zone Fenton, but they will offer online ticket purchasing in the near future. Tickets start at $10 for 30 minutes of jump time and go up to $22 for 120 minutes. You can save time by signing a waiver to jump online–no need to print it out, they’ll look up your child’s name when you get there. IMPORTANT NOTE: Everyone needs a waiver, so if you’re bringing your kid’s friends, have their parents sign waivers from home too.

Sky Zone Fenton will be offering lots of cool events! They have evening fitness classes, student nights ($5 jumps with student id), morning toddler times, homeschooler jump times, Sky Jams on Friday nights for people over 16, and an all ages Jumpapalooza on Saturday nights. They do birthday parties too.

The Sky Zone is open now, but their official grand opening is October 3rd. They’re putting on a party with contests, raffle prizes, dodgeball games and a whole lot of fun! The Fenton Sky Zone is in Old Towne Fenton, at 631 Gravois Rd, right next to Gold’s Gym and across from the Fenton Post Office. 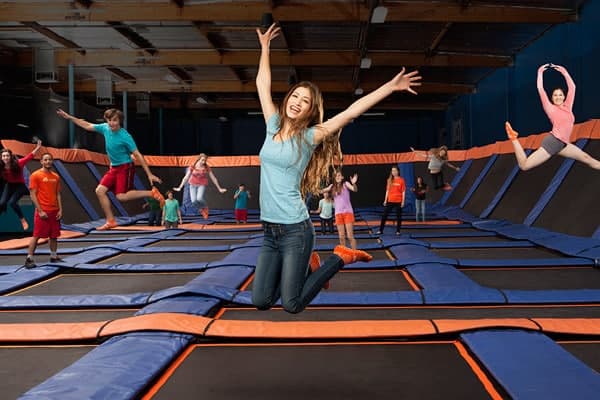 You can’t bring food or drinks into Sky Zone, but they do offer a concession stand. There’s also a lounge over looking the courts to have your snacks. This is also a nice place for parents of older kids to hang out.

Thinking of a birthday party at Sky Zone Fenton? You can bring in your cake or cupcakes and they’ll supply the pizza and soda. You’ll also get a separate party room with your package.