How can you combine your love of St. Louis, beer and your kids? Why take them on a tour of the Anheuser-Busch Brewery, of course! Yes, a tour of our beloved King of Beers is totally family friendly! Seriously! What better way to teach kids about city history than to tour one of our oldest companies?

The last time I posted about brew tours at A-B was a couple years ago, and my how things have changed! Don’t worry, it’s mostly a good change. There are now five ways to tour the Anheuser-Busch Brewery in St. Louis, and one of the tours is still free. The tours are: the Complimentary Brewery Tour, the Day Fresh Brewery Tour, the Historic Schoolhouse Museum tour, the Beermaster Tour and the Beer School. (More information about each tour can be found here.) 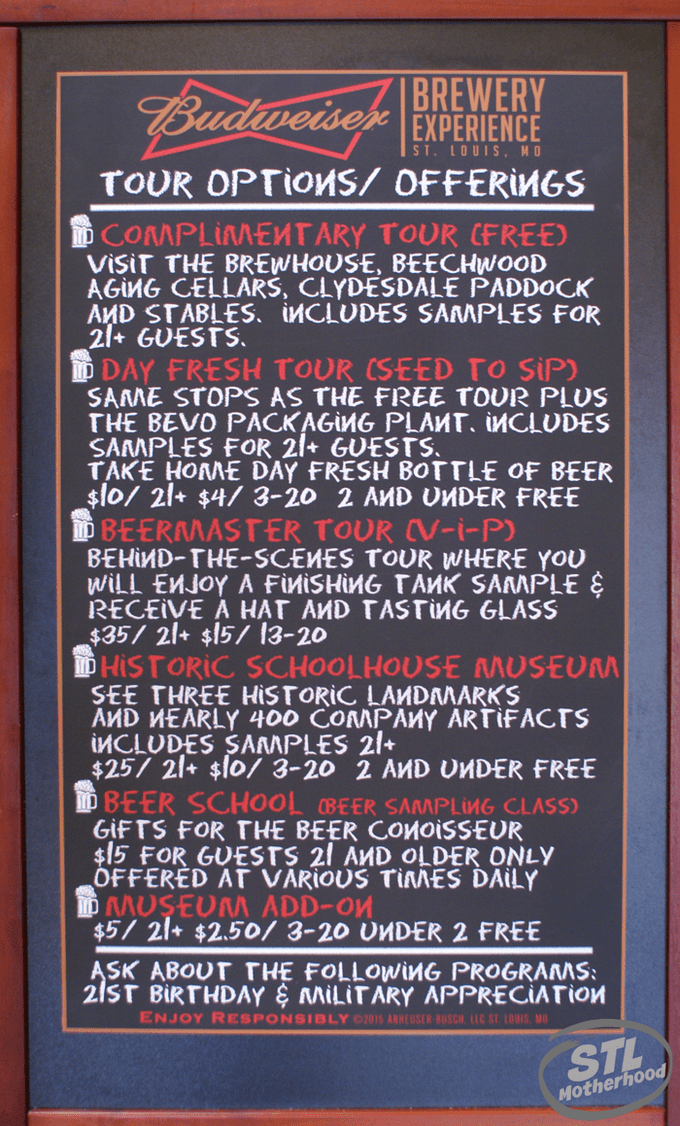 To find out how things have changed I went right to the source and took a tour at Anheuser-Busch. I peppered my guide with questions about the various tours and here’s what I found out!

First, the outdoor Biergarten has replaced the old hospitality rooms. Don’t worry, it’s tented–and heated in the winter! Tour guides hand out tokens to all the guests over 21 and these can be exchanged for a free beer at the bar when you’re done with the tour. You’ll get another sample during the tour, so the beer is spread out. This is a great change since the Biergarten is so much more fun than the hospitality rooms and you can hang out as long as you like. 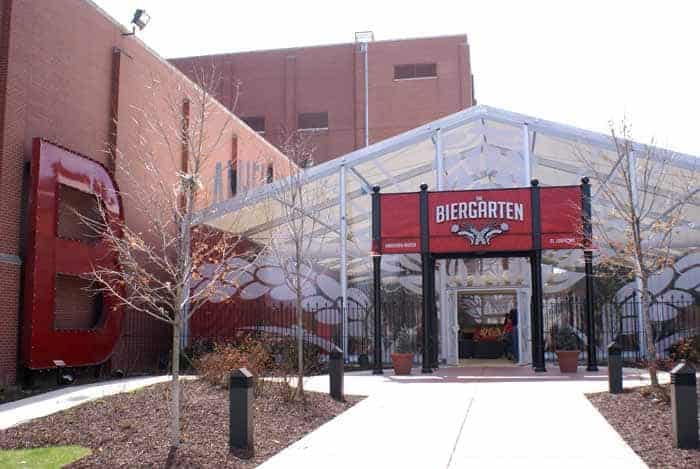 The Complimentary Tour has been shorten and no longer visits the bottling line, but you’ll still see the Clydesdale stable, the beechwood aging tanks and the Brew House. Adults get a beer sample at the Brew House and and the end of the tour in the Biergarten. It’s about 45 minutes.

The Day Fresh Brewery Tour is basically the old free tour and still visits the bottling line along with everything in the Complimentary Tour. It now costs $10, but you’ll get a third beer in a bottle you can take home. The bottle is right off the line. (Minors are only $4 and under 2 are free.)  This tour is about 75 minutes long.

The Historic Schoolhouse Museum Tour visits the three historic buildings on campus and is limited to a much smaller group so you can really chat with your guide. It costs $25 for adults, $10 for minors and under 2 are free. Adults will get three samples on the tour: at the Brew House, the Museum and at the Biergarten. You’ll also get to keep your sampling glass from the museum.

The Beermaster Tour is a behind the scene adventure and you’ll get to taste beers right from the tanks, just like the A-B Brewmasters. It’s $35 and you’ll get to keep a glass AND a hat. Minors are $15 and under 2 are free. This tour is about 2 hours long, visits everything on the Day Fresh Tour plus a whole lot more–the Primary Fermentation Cellar, Lager Cellar and the Finishing Cellar. You’ll also need to RSVP for this tour.

The Beer School is a class offered just to adults over 21. It’s $15.  It runs about 45 minutes and introduces you to a variety of beer styles, ingredients, proper pouring techniques and food-pairing suggestions. You’ll also take home “gifts for the beer connoisseur.”

Bonus: If you want to peek inside the museum, but don’t want a huge history lesson, you can add a museum stop to any tour for $5. But they won’t give you an extra beer. 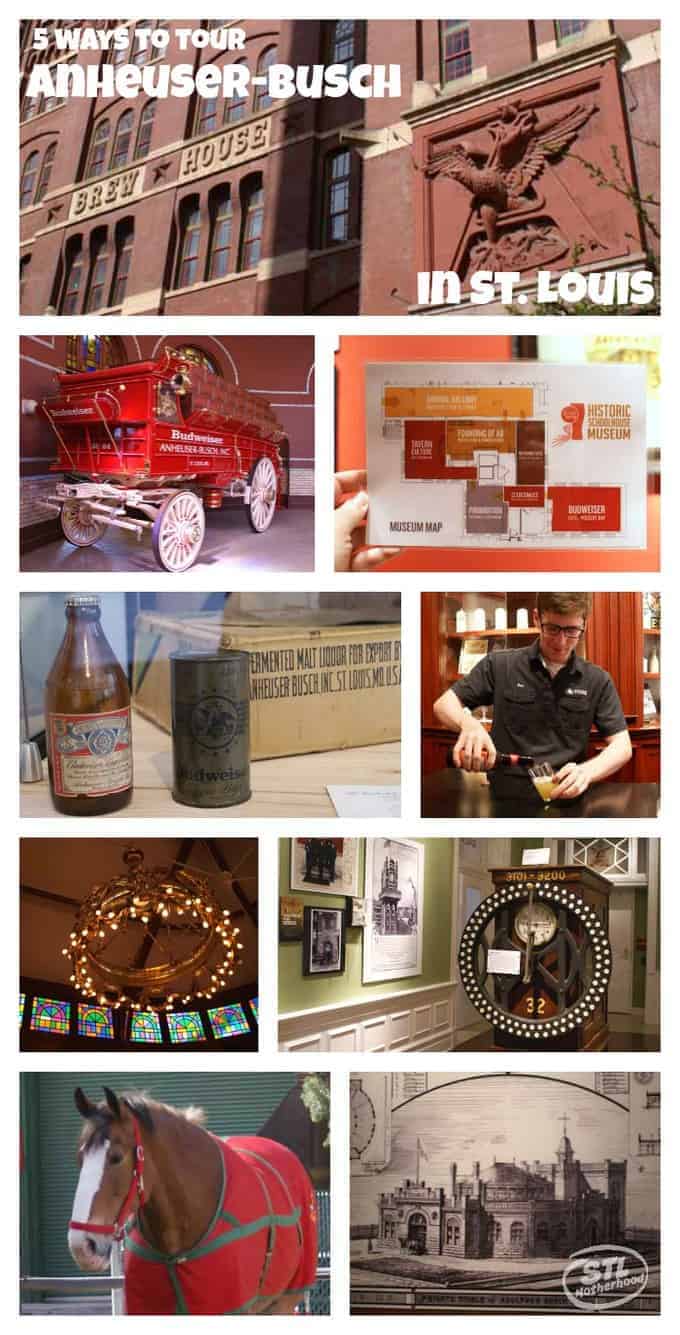 Since I’ve done the old complementary tour many times in the past, I decided to check out the new museum. This tour really delves deep into the history of Anheuser-Busch and the Busch family. You’ll visit all three buildings owned by A-B that are on the Registry of National Historic Landmarks: the Clydesdale Stable, the Brew House and the Old Schoolhouse. They were built between 1868 and 1892 and were placed on the registry back in 1967.

If you’ve toured the brewery before, you’ve seen the stable and the brew house…but never the inside of the school. Lyon School, as it was called, was once a part of the St. Louis Public School District, and was sold to the brewery in 1907. It served as the brewery’s main administrative building, and each president of Anheuser-Busch had an office there until 1982 when the office building at One Busch Place was finished.

The school was recently converted into a museum to house A-B’s vast array of beer relics. On display are photos, maps, steins and all sorts of 19th century beer swag. One room is set up like a pub–you get to exchange a token given to you by your tour guide here for a sample of fresh beer…just like when beer salesmen roamed the streets of St. Louis drumming up new customers. 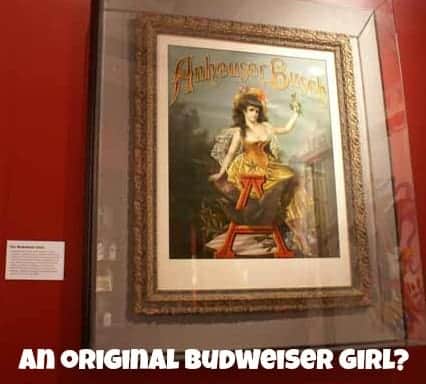 You can learn a lot on this tour. Even though I’ve seen the Clydesdale Stable before, I learn even more about it on this trip. And if you know me at all, you know the horses are my favorite part of the tour. For example, I learned that the horse names over the stalls are from the very first Budweiser Clydesdales hitch!

$25 might seem a little steep for a brewery tour, even if they are giving you an extra beer. However, if you like history it’s worth it. Our guides really new everything about Anheuser-Busch and the small tour size was really nice. It was like a personal tour of the brewery! We had time to really look at everything, ask tons of questions and take plenty of photos. Unlike the free tour I’ve taken in the past, our guides never turned on a film–every fact was known by heart.

Now I’ll admit, I went on this tour while the kids were at school–I took a friend with me that day. We had a blast! After our three samples we decided to play it safe and stick around the Biergarten for lunch.

I’m not sure that smaller children would appreciate the museum tour–it was, after all, a giant history lesson. If you’re taking your whole family to the brewery I think I’d still recommend the Complementary tour, especially now that it’s shorter. Plan to stick around the beer garden for a while, if not for lunch, then for a round of fresh pretzels! 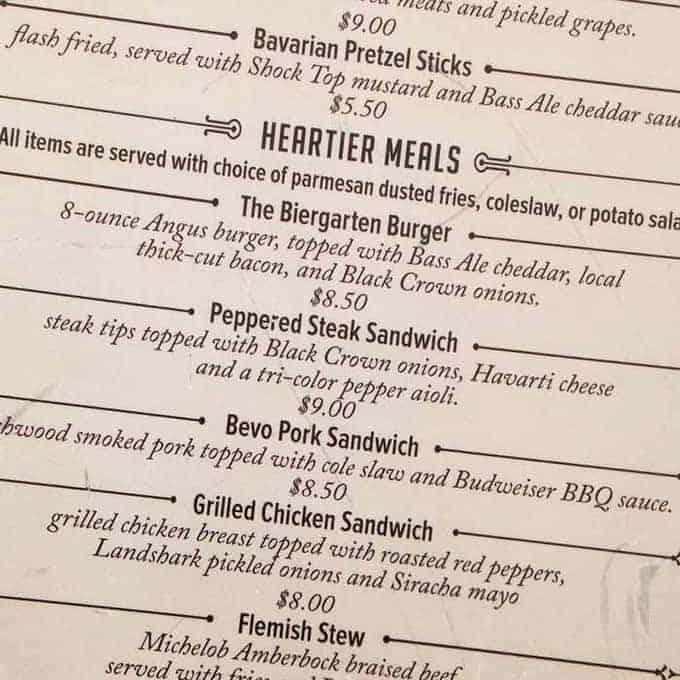 If you time your visit right, you can also get a free photo with a Clydesdale! Every day between 3:30 and 4:30 pm they bring a horse to the Biergarten. Visitors can snap a photo with him using their own camera.