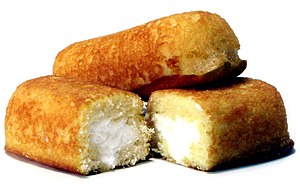 It looks like the labor showdown between Hostess, makers of lunchbox snacks like Twinkies and Ding Dongs, and their union bakers is coming to a miserable end.

Update: On Friday morning Hostess confirmed they would shut down.

Neither side of the employee/employer face-off has blinked as of 8pm on Thursday night. Hostess already shut down three bakeries, including one in St. Louis, as a result of the strike. The company has threatened to liquidate if the workers didn’t come back by 4pm today. They are holding off on an official announcement until Friday.

As a St. Louis mommy blogger, I’m pretty torn. On the one hand, I hate to see those St. Louis jobs go. On the other hand, I don’t eat Twinkies, and I don’t buy them often for my kids.

I don’t have anything against Twinkie the Kid, mind you. I’ve eaten a number of Twinkies over my lifetime and I’ve been known to stock up at the Wonder Bread outlet store in South County when I’m in the neighborhood. But if I put something as fattening as a Ding Dong in my kid’s lunchbox, I’m pretty sure they’d take away my mom card.* At the beginning of this school year I did a little research on school lunches and found that it’s darn difficult to include a 150 calorie snack cake in a brown bag lunch that meets the “healthy” guidelines set down by the Feds for (cafeteria) school lunches.

And maybe all that’s why a company that dates back to 1930 has gone bankrupt. Twice.

Hostess sales declined as consumers in the 1980s and ’90s shied away from carbohydrate villains like snack cakes and white bread. Attempts to come up with new products didn’t pan out. ~Fortune/CNN

An article from the St. Louis Post-Dispatch quotes Mayor Francis Slay saying he had been told long ago that the bakery in North St. Louis would close anyway. It would seem that Hostess had more baking capacity than the Twinkies cramming population required. (And no, that’s not because Hostess baked a bazillion Twinkies 20 years ago and we’ve been eating them ever since. Snopes debunked that myth last year.)

We’ll see tomorrow if Hostess will survive. At least we still have Little Debbie.

*My haul from the Wonder outlet was always consumed as a after school snack in the privacy of our own living room. And in the car on the way home.