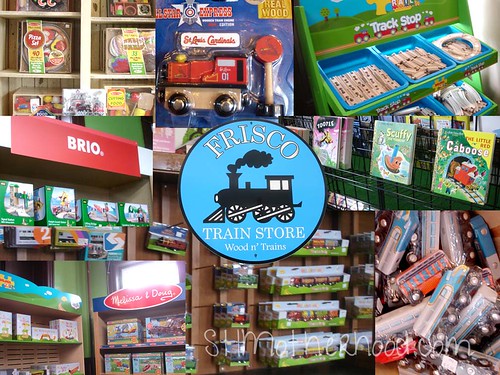 I wanted to write up a review on the “new” Frisco Train Store in Valley Park today. It’s so totally awesome and if your kids are into trains you HAVE to come see it.

But then I was thinking…if you, kind reader, haven’t been to the old store, you won’t understand why I’m gushing with joy over the Phoenix-like transformation of the Frisco. The Frisco Train Store is really an old store with a new name, new owner and new lease on life.

See, the Frisco used to be the location of the Whittle Shortline Railroad Toy Store. To put it kindly, the Whittle downsized rather suddenly and now only sells toys online. You can read about that mess here at the Riverfront Times. 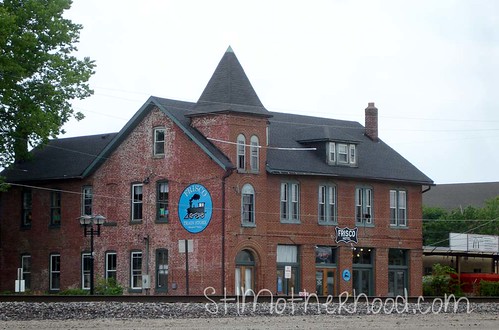 Here’s the back story: The Whittle Shortline Railroad was started in 1999 by a local dad who handcrafted wooden toy trains on site. They were–and still are–awesome, well-built, American handcrafted trains. They roll on Thomas size track but have realistic train details–no faces, just real train logos and paint jobs. You can let your kid push around Amtrak or Burlington Northern trains  instead of their cartoon imposters.

Whittle trains became immensely popular around 2007 when American parents were having a major freak out over a flood of Chinese made toys covered in lead paint. It seemed like we couldn’t by a single toy that wasn’t trying to poison our kids. People started noticing old school companies like Whittle. Real wooden toys! Old fashioned goodness! American made!

Whittle outgrew Valley Park’s workshop and built a factory in rural Missouri. They were selling bunches of toys online and things looked good.

The Valley Park store was also locally popular with at-home moms due to a 15-foot train table in the store where kids were invited the kids to play their hearts out. My oldest was one of those early engineers (he’s 14 now) and we had many a fun afternoon at Whittle. 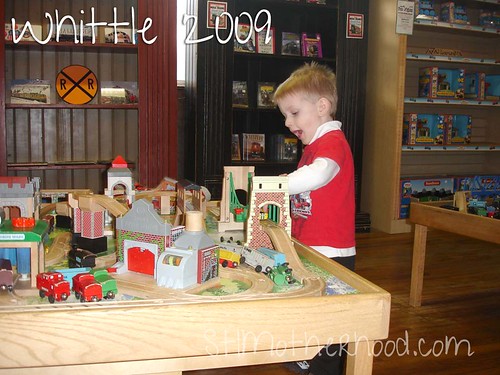 By Christmas break 2012 I had given up on Whittle. I figured that Mitch would be outgrowing wooden trains pretty soon and wouldn’t have time to visit when he started elementary school. I vowed to never come back–the company seemed more interested in selling their goods online than to local parents.

According to the RFT, Whittle Shortline Railroad suffered many financial setbacks, starting with a flood in 2008 that ruined their factory and shut down production. There’s more to the story, but this isn’t the place to tell it.

Whittle shut the doors on their Valley Park store last February and now only sells their toys online. The building’s owner didn’t want to be left with a vacant building in a prime location and started looking around for someone to reopen the store.

He didn’t have to look far. 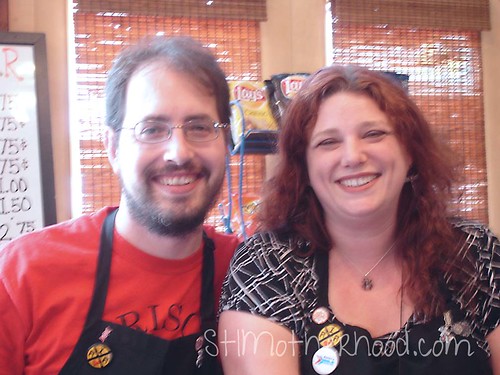 Kristin Berry was the manager of the toy shop for years and was more than excited to give the place her own spin. There was little she could do as an employee to stop Whittle’s downward slide. But she’s a mom of train loving boys and knew what worked with Whittle’s local customer base–and what didn’t. She and her husband Tom took over the building’s lease, gathered their family and friends and set to work fixing up the place. By now it needed paint, plaster, plumbing repairs and a rail car full of TLC. They replaced the old battered train table with an even bigger set up and restocked the shelves with Brio, Thomas, Maple Landmark and Melissa and Doug. Sadly, they couldn’t come to an agreement with Whittle. You still have to go online to find their toys.

The shop was renamed “The Frisco Train Store” after the history of the 19th century building it occupies, a former Frisco railroad hotel.

They reopened in April and things look back on track. Check out Frisco’s website here for more details or read my review. 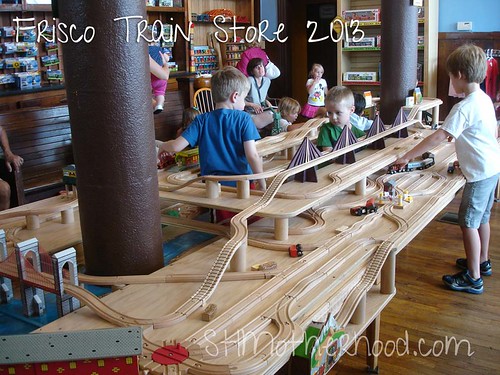