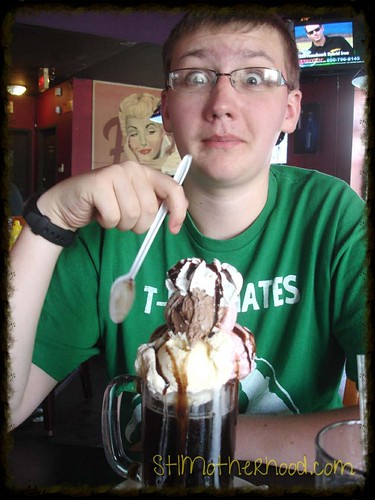 I took the kids on a little blogger photo safari to the Delmar Loop this week. It was a win-win sort of trip–I found things to blog about and the kids got ice cream at Fitz’s American Grill and Bottleworks.

Let me rephrase that, the kids got ice cream the size of their freakin’ heads.

In case you’re new to St. Louis or just been living under a rock, Fitz’s is our hometown soda company. They’ve been making root beer and other flavored sodas since 1947. Or something like that–actually the brand disappeared for a while, but was revived in 1993.

You can get the soda at the grocery store–it’s only sold in glass bottles–or find it at restaurants who have a flair for local flavor. But if you really want to treat your taste buds, head down to the Loop where Fitz’s set up their restaurant, complete with a vintage bottling line.

Check their schedule before you go if you want to see the bottling line in action. 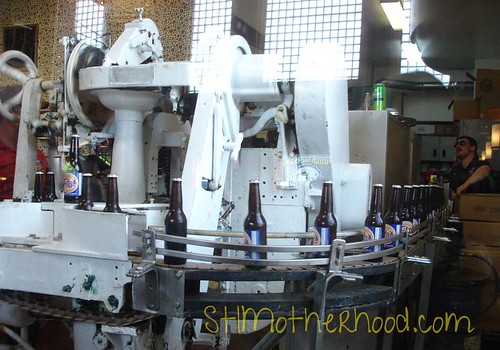 We stopped at Fitz’s for dessert after hitting BBQ at Vernon’s. I had reviewed Vernon’s in February for Patch.com (you can read the review here) and Ryan’s been bugging me to take him there over summer break.

Yeah, big mistake. We should have just come for the floats! The floats at Fitz’s have FOUR scoops of ice cream balanced precisely on a glass mug of soda. They have 19 different floats, plus shakes and pie a’la mode. Ryan got the 3 Amigos (vanilla, chocolate and strawberry ice cream on root beer) and I got the Big Bess (strawberry ice cream on cream soda). Mitch got a chocolate shake. 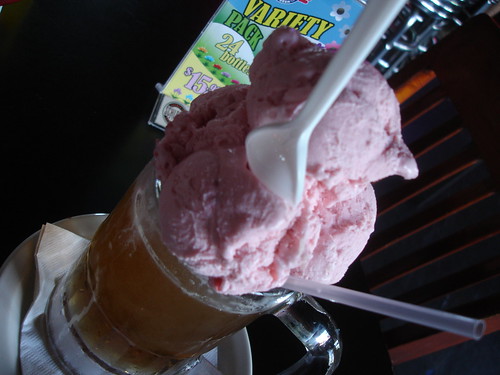 The table next to us learned from our folly and split a float three ways.

We’re already planning our next lunch outing to the Loop. We spotted a restaurant across the street that claims to only serve Mac and Cheese…