I love Halloween. I love the cute costumes, the pumpkin carving and the candy. Oh, the candy! But haunted houses? Not so much. I still don’t understand why people pay good money to get the pants scared off them. The last time I went to a haunted house, my college boyfriend made it his mission to scare me more than the actors. It’s a wonder I married that guy. So when I got an invite to walk through The Darkness in Soulard on media preview night, my first response was no. Heck no. No infinity. Noooooooo.

Then I saw that there was zombie laser tag in Silo X.

My teenager loves laser tag. He even loves zombies. So I decided to take one for the team, and visit The Darkness with my oldest son. After all, the invite said they’d keep the lights on so we could get photos. How bad could it be?

The Darkness: One Freaky Scary Place

Actually, I’d LIKE to describe it in way more colorful terms, but I keep the language on this blog PG.

This was my first ever trip through The Darkness–but not my son’s. He’s 17 and I’ve been letting him go to haunted houses since 8th grade when another parent offered to escort his group of friends. He tells me the fun of haunted houses is not getting scared, but watching your friends get scared. When you’re a teen, there’s courage in numbers.

So, for full disclosure, The Darkness invited us out on media preview night, for free. There were no actors in the haunted house and the work lights were on in the lower level. The upstairs was lit as it normally would be and really wasn’t THAT dark–just moody. We could still see the pressure plates that activated the animatronics on the floor and all the hidey holes where actors would surely pop out when paying customers are visiting. After the first animatronic made me scream like a little girl and drop a few f-bombs, my son made an effort to not step on anymore. And there’s a lot. At least one per scene–if you’re lucky. Some rooms had 2 or 3 triggers for all the mechanical monsters that jump at you, air blasts, water spritzs, and loud gun like pops. 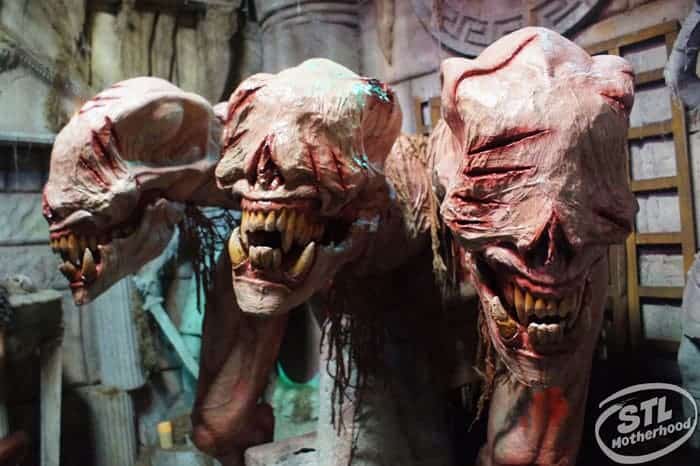 The Darkness is Huge

This place is huge. According to my camera’s time stamps, we went in at 5:12pm and made it out at 5:44pm. This is actual time wandering through the maze of the Darkness, not waiting in line. We didn’t stop and take selfies here either…we just kept moving. I imagine if zombies were chasing us through we’d take less time–but not much.

The Darkness is quite a complex–I think the term is Scare Park–that occupies an entire warehouse next to Soulard Market. The main “haunted house” has several themes, from tombs to creepy mansion. The last stretch is Terror Visions, a top-notch 3D haunt with crazy black lights, no-so-fun house mirrors and video screens where clowns do awful things. Terror Visions is included with your admission, but it’s such a drastic theme change, that they count it as a separate Haunt. You’ll exit through a totally normal museum of monsters and a gift shop. All of this comes with your ticket. Next door to the Darkness (but in the same building) is the new Silo X and Escape Rooms. These are separate venues, but more on that later.

Too Scary for my Camera

Since the lights were on through the lower level, I thought I’d a get a few pictures. After I realized these images were too disturbing for my blog, I put the camera away. Ok, I took it back out for some scary clowns in Terror Visions…the haunted fun house zone was just too amazing–and not quite as gruesome. I’m guessing the actors will take it up a frightening notch. Oh, that picture below? Not actors. Part of the decor.

Who Should Go to The Darkness?

I’m not going to tell you how to parent, but the Darkness is NOT for kids. But of course you knew that. If you’re reading this, you’re probably wondering at what age it’s safe to take an older kid–perhaps a tween–to The Darkness. Well…let’s put it this way:

Even without actors doing jump scares I found the whole place @$%#@ creepy. As I was meant too. The Darkness aims to impress and it’s done an excellent job. Even I had to stop and admire the dizzying 3D effects in the Terror Visions section, where you’re invited to put on 3D glasses and watch the eye popping paint job on the walls and floor. And I was really impressed with the windows–most of which are flat screen TVs with various creepy crawlies peering in…or trying to break through.

It’s an amazing place and a technical wonderland. But the scenes, which cover jungles, dungeons, tombs, barns, factories, circuses and mansions…portray murder in the most graphic ways. Heads on sticks. Heads on chains. Bodies with no heads. Bodies with no flesh. Bodies that are inside out. And some of the female mannequin are pretty naked. If it were a movie, it would be Rated R.

So here’s my advice. Did you let your kid see Deadpool this summer? No, wait, that’s not even close. Deadpool is funny. The Darkness is very, very not funny. Have you rented the Ring? Did your tween sleep that night? If your tween or teen likes a good scare, can handle walking through the woods without a flashlight and maybe shaves regularly, then sure. Go to the Darkness. But you’re never going to be ready.

Silo X has been terrifying me just with their radio commercials for years and years. Maybe it’s because I hear them while driving down dark roads, or maybe because the original Silo X is just a couple miles from my house. (That place is now called Creepy World. It’s run by the same company as The Darkness.)

Silo X is at both at the Soulard location at out in Fenton.  But only the downtown location is offering zombie laser tag. It’s a separate venue with it’s own ticket: $15 on the weekends and $20 on the select week nights. That’s right, it’s more expensive Sunday to Thursday because that’s when they hand out M-16 style laser guns to defend yourself from the zombies. 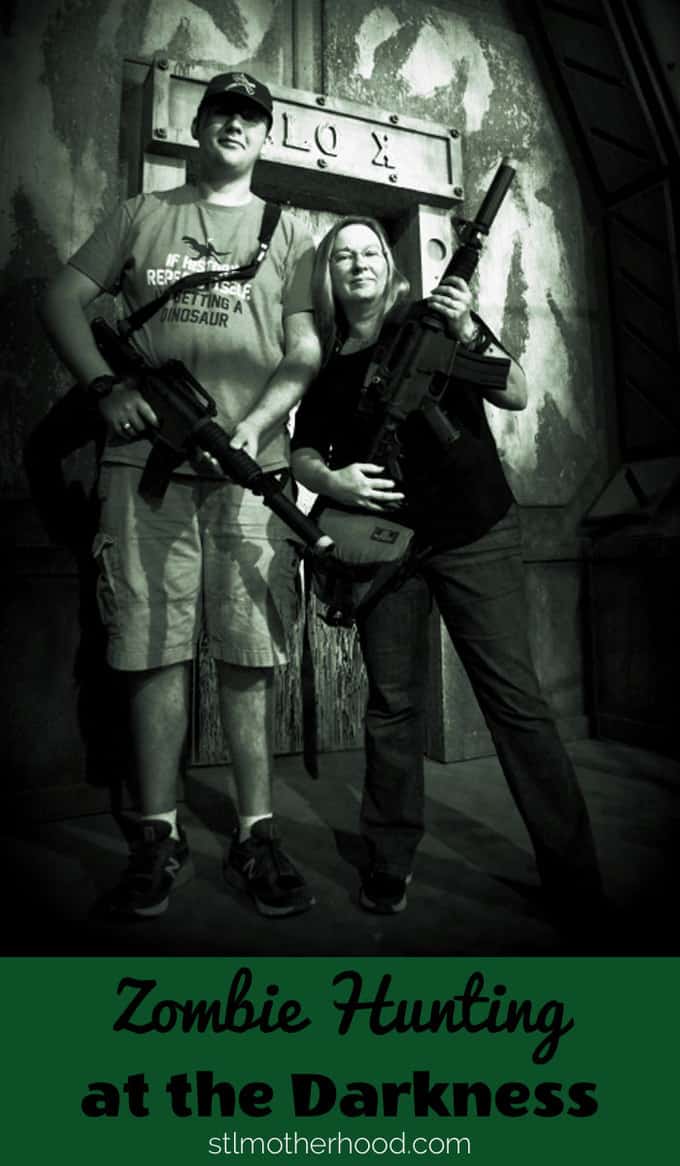 Silo X is still open on Friday & Saturday, but just a regular run-from-the-zombies haunt. If you have a choice, go when they’re doing laser tag. Even I found that pretty fun. Silo X, in case you’ve been living under a rock for the last 23 years (or just moved here) is a “contaminated” military medical experiment gone wrong. The place is over run with zombies, and uses animatronics and live actors.

The zombie actors are equipped with laser tag targets on their heads. Their job is to rush at you from every corner and closet…then collapse in a heap when you tag them. But fair warning: they only stay down for a moment. If you take to long to clear a room, they’ll get right back up and at you.

The guns are pretty fun. They’re heavy, for added realism, and loaded with a CO2 cartridge for some kick. You wear a bandoleer that tracks your hits and if you’ve been chewed on. Don’t worry, they don’t actually touch you, but if they get too close the game counts it as a bite and it subtracts from your score.

I’m not sure why the company running this place decided to only run the laser tag hunt on week nights. The tickets for the hunt are timed, so it’s not like they’re worried about turning people away if the line gets long. Maybe the actors get worn out with all that falling they have to do?