We don’t buy a lot of things online and haven’t made a big appliance purchase in…forever. So one thing we lack around here are giant boxes. 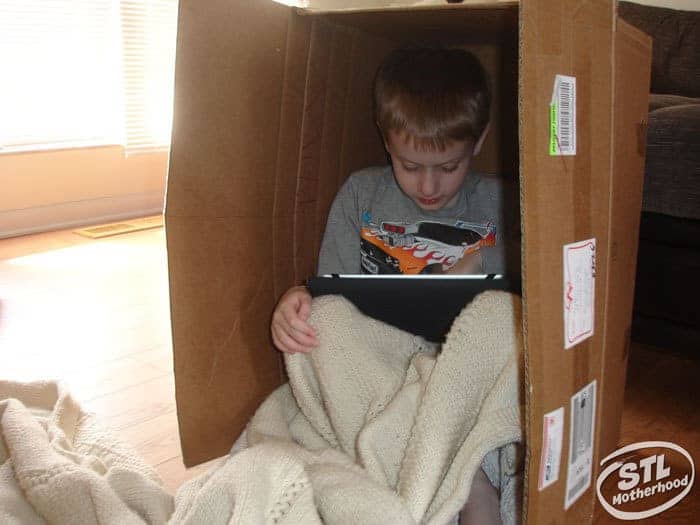 Expect this one largish box cluttering up my craft/laundry/holiday storage room. It came with a load of Christmas presents inside and got stuffed in a corner. Forgotten.

Until I needed to sew something yesterday and figured out the box was in the way of my sewing machine and no one had noticed the dang thing yet to haul it to the trash. So I lugged it upstairs and Mitch, my 5-year-old, lit up like I was bringing him a new toy.

Well, it had already missed 10 or 12 trash days, so I figured one more wasn’t going to hurt. I turned over the box.

While sewing something, my kid showed up with ninja stealth and scared me to death. He was holding a torn off flap of the box, with an airplane drawn on it in marker.

I was near my craft gear, so cutting out the airplane was quick and easy. He flew away with it, happy with his creativity.

Later I was in the kitchen.

“Hey mom! There’s a package for you!”

I looked over at the doorway and there was the box. Closed and giggling. He got “mailed” several times that afternoon.

He drew windows on it and called it a house. He added a cat door–for his stuffed animals.

This morning I snapped the photo you see on this blog. He was cuddled up inside the box, with an afghan, a stuffed animal, and my ipad.

I think it’s going to be a long while before this box ever makes it to the trash. But that’s ok. He’s playing with it more than most of the gifts that were delivered in the box in the first place.