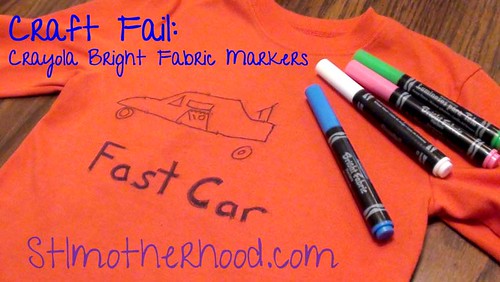 I’ve got an artsy kid. He’s five and he loves to draw, paint, tape and cut out little jibs of paper all over the house. My kitchen is a museum of kindergarten art and I can’t even use the wipe board to jot down phone numbers anymore because it’s covered in trains or flaming planes.

He needs a new medium, because I’m running out of display space.

As luck would have it, I discovered a box of Crayola Bright Fabric Markers at the store right before his school’s Reading Week. He needed to wear a shirt with words on it, and I thought I would look like Super Mom if my kid waltzed in with a shirt of his own making.

Plus we had a couple blank shirts that he’s going to grow out of any minute, so it wouldn’t matter if the shirt art didn’t turn out stellar. I figured he could write something on one shirt and draw a train or flying car on the other.

Crayola is great company and I love many, many of their products. But this one didn’t work.

Ok, the black marker worked just fine on the shirts (we had red and orange shirts to use) and his outline turned out perfect.

But when it came to coloring in the drawings we had a massive issue.

None of the other markers would lay down color on the first pass. The blue looked like black, the yellow and white were invisible. Mitch actually burst into tears after trying to color his plane.

I distracted him with something else and re-read the instructions. It said to use thin layers of color. I kept trying to fill in the plane for him. First I tried letting the marker dry between coats. Then I tried rapid strokes of color. I walked away from the shirt and came back and colored more.

The top photo is after Mitch tried to color it, with one or two passes. It’s pale and sad looking.

The bottom photo is after I worked on it for a good half-hour and a dozen or more layers of color. I finally got the yellow to look sorta yellow and the blue on the cockpit looks a bit like a midnight blue. The marker got think and crusty and was not going on smooth.

Mitch was happy enough with his orange shirt, which only used the black marker. He wore it to school, but he won’t wear it again.

If you go to Crayola’s website the reviews are just as bad. These markers just don’t work.

This isn’t the first time a cool sounding Crayola product let us down. We reviewed Crayola’s colored bubbles in 2011 and found that the bubbles were mildly colored (not like the brilliant colors on the packaging) and very messy. But at least the bubbles worked.

These markers did not–at least not on colored fabric as the packaging suggests.

You might get better results with a white shirt, but that is NOT how the product is meant to be used.