The other day I was on Facebook and a mom asked what was the best app to download to let her kid play Minecraft on a phone? I hate to make fun of non-gamer moms…but there’s only one app for Minecraft: Pocket Edition. Anything else is a cheap knockoff. Literally. If it’s not Mojang, it’s not Minecraft. 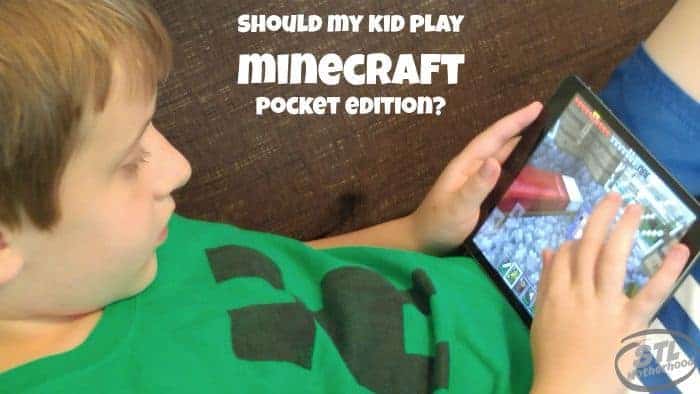 This post is part of a series called Minecraft Mondays. Follow along as I attempt to explain Minecraft to moms who don’t game.

In the beginning, there was Minecraft. It was a simple little PC game created by a guy called Notch and his company Mojang. He didn’t think it would go far…but you know the story. Unlike other games, Minecraft has always been a work in progress. You buy a license to play the game once and whenever they update the game it’s FREE. There’s no Minecraft 2, Minecraft 3…just Minecraft.

By 2011 the game was pretty dang popular and they released a version called Minecraft Pocket Edition for mobile. This version was simpler–I’m guessing similar to the original version released in 2009. (I could be wrong, I didn’t play in 2009.) Like big brother Minecraft, Pocket Edition is a game you buy once and get all the upgrades for free as they are developed.

Well, simply put, Minecraft PE is just a lighter version of the game that runs on your phone or tablet. You can get it for your  Apple, Android and Windows device. The controls and game play have been adapted for a touch screen–no mouse required!

Like the computer and console versions, you can play in Survival Mode or Creative. Survival means you start with nothing and gather all your resources…Creative gives you all the building blocks and the ability to fly.

As of July 2015 the mobile game lacks enchanting and has limited redstone capabilities. Enchanting is the ability to use magic and redstone is the power source for machines (like doors that open with a button). Villagers were added recently, but they can’t open doors and tend to wander off, making them frustrating. They also can’t trade with your player. All this might be changing soon, as a new update is coming out later this summer.

Pocket Edition is not compatible with online servers, so it remains a single player game. You can, however, play with a friend if you share Wi-Fi…as in, he’s sitting on the couch next to you and hooked into your home Wi-Fi network. Apple, Android and Windows users can play together, too. 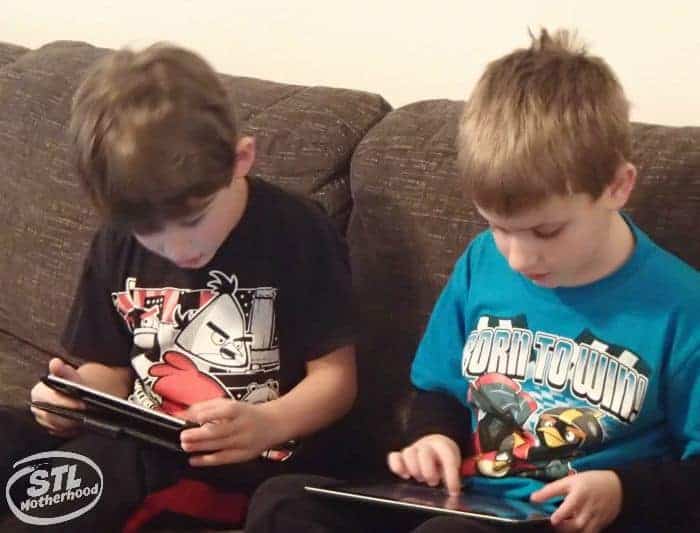 I my opinion, Minecraft Pocket Edition is a great starting point for kids and adults! Sure, it lacks some of the advanced features, but no newbie noob is going to be building piston doors from scratch. Here’s a few more reasons:

If you download Minecraft Pocket Edition and have more than one device, I highly recommend playing WITH your child. Even if you don’t know what you’re doing, playing games with your kids is a great way to bond with them! When we got our second tablet the first thing Mitch wanted me to do was play Minecraft with him. Unlike sharing a game on a console, there’s no split screen and you’re not tied to each other–each player is just sharing a world and can roam about independently. We often build houses together and when Mitch was younger he put me to work digging up stone and iron…I don’t think he liked the dark much!

Will My Kid Get Tired of Pocket Edition?

I’ve heard from moms who say their kid has “out grown” Minecraft PE once they were allowed to play the full version. But not all kids are the same–it largely depends on their style of play. My son really enjoys building in Creative mode and will spend three days making wild minecart rides! Other’s might miss the the social aspect of playing on a friendly server like Cubeville.org, where Mitch and I help build a thriving city.

But avoiding a $7 game that a child might outgrown is like avoiding a tricycle. Do you start your little guy on a 26-inch mountain bike because they’re “just going to outgrow” a trike? Of course not! So, go ahead and download Minecraft Pocket Edition! You’ll be the coolest mom on the block. 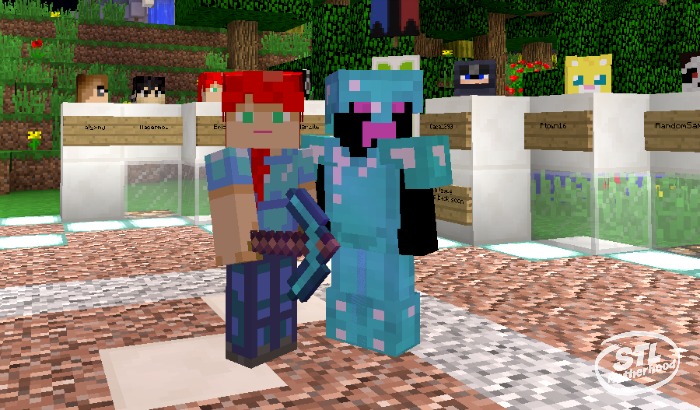