Mitch recently discovered the wonderful world of Minecraft YouTube videos. We knew tutorials were out there, but we had no idea there was so many videos that are fun to watch!

YouTube is not a place you want your kids wandering around alone, so I highly suggest sitting down together to watch these. My recommendations are totally PG, but you never know what is going to show up in that sidebar of suggested videos. 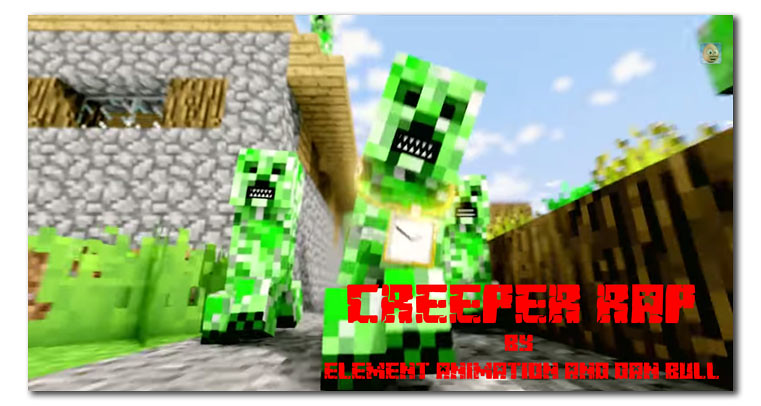 In putting together this list, I noticed that most of our favorite videos are made by or with the help of Slamacow, (Steven Davis) a young animator from Washington. If you’re bored some afternoon, just Google Slamacow and you’ll find something good.

#6 Spleef by Slamacow. Steve and his friends  (a zombie and an Enderman)  play a game of Spleef, which my teen tells me is a real Minecraft game played on shared servers.

#5 Creeper Encounter by Slamacow. Steve and his friends come upon a gang of hissing creepers, a la West Side Story.

#4 Witch Encounter by Slamacow. Steve and his friends fall (literally) into a witch’s trap. And they have to dance their way out.

#3 Creeper Rap by Element Animation and Dan Bull. A creeper with a British accent raps about how mean he is–creepers are bad guys after all. I can’t vouch for the rest of Element Animation’s stuff–we’ve seen some good videos from them, but Dan Bull also raps about other video games, I just don’t like rap enough to wade through them. This tune is catchy, though…you’ll find yourself humming “boom, boom, boom” all day long. The lyrics are clean, but he is rapping about blowing everyone up, if you’re the non-violent sort.

Sidenote: there are two versions, and we are linking to Ending B, Mitch’s favorite, because Steve stops him at the end. Ending A just has the singing creeper blow up at the end.

#2 New World, by SkyDoesMinecraft and Slamacow. This is a parody of Cold Play’s Paradise with a band learning how to play Minecraft. This one gets extra points for creativity. It really looks like something a band would produce, complete with a guitar player taking out skeletons with his instrument.

#1 Take Back the Night by Captain Sparklez and Slamacow. This one is an original music video showing a young hero growing up and seeking revenge. It’s a kinda sad for little kids, because the hero starts as a child found in the rubble of his father’s fallen castle. He’s adopted by the villagers, taught to fight by a Kung Fu master and so forth. The blood is kept to a minimum, but people die in this one. It’s very tastefully done, so watch it first yourself if you’re not sure. Mitch thinks its the most awesome story ever.