What will you find at the Transportation Museum? Trains, planes and automobiles…that your kid can PLAY with! The museum is dominated by it’s outdoor train collection, but there’s also cars, two planes and a tug boat you can hop aboard. Seriously. 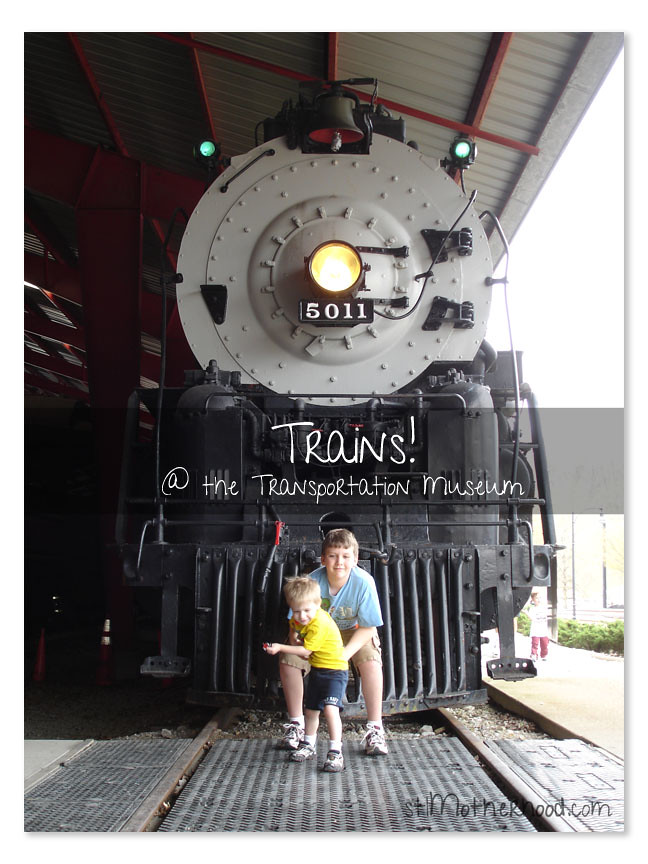 The Transportation Museum is one my boys FAVORITE places to go. We’ve been members for years–if you have a little kid who is a Thomas the Train fan, this is one of those memberships that quickly pays for itself. But let me show you around first.

This is a huge place, so bring your walking shoes, hat and sunblock in the summer. The museum has expanded recently–there’s a “new” visitor’s center and parking lot that opened March 2012. The old visitor center now houses a museum exhibit, but you can still buy your tickets there if you happen to wander in through the old entrance. Tickets are $8 for adults, $5 for kids and under 3 are free.

Inside the Visitor’s Center is the best part for little kids: the Creation Station! 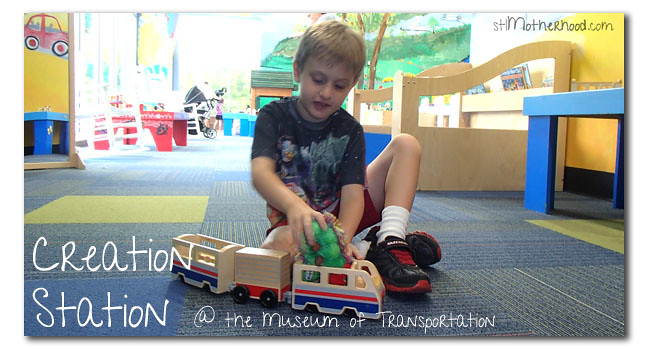 The Creation Station is a playroom just for little train fans. It has buckets of Thomas trains, train boards, blocks, a bus to drive, a kitchen to play with and books to read. Miss Linda runs the playroom and is always ready to greet the kids with a smile and help them make a cute little craft. We come so often she greet’s Mitch by name!

They sell timed tickets ($2 a piece) to the Creation Station and you get a hour to play. Hours for the Creation Station are complex. Its open to the public during the week and some Sundays, but Saturdays are reserved for camps and birthday parties. Check the website for the latest details–they tend to adjust the schedule with the seasons as well.

While you’re waiting for the Creation Station you can check out a model train or see old vehicles on display. They rotate the vehicles in the collection, so you might see a fire truck, a wagon or a horse drawn street car. There’s also a gift shop full of train merchandise and a snack bar. A comfy bench and a TV running train themed cartoons is just outside the Creation Station.

While you’re at the Visitor’s Center, buy a ticket to ride the miniature train!  The train runs from March to November  whenever the museum is open and chugs around the parking lot. On the weekends you can catch a trolley ride–a real, restored streetcar–around the train collection on the upper lot. Train tickets are $4 for a wristband, and you get unlimited rides for the day. 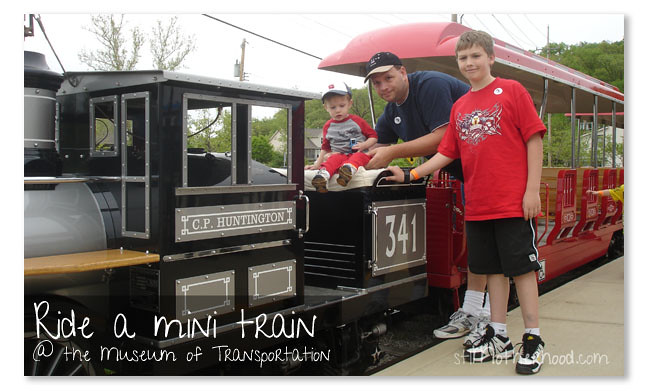 After you’ve seen everything at the visitor’s center, it’s time to catch the blue tram up the hill to see the train collection! Or hike up the hill, it’s up to you. But the tram ride is free, and kids love a tram ride. Up the hill you’ll find Barrett Station (I have to stop calling it the old visitor’s center…but that’s what it is) and the Earl C. Lindburg Automobile Center with a rotating collection of cool cars. 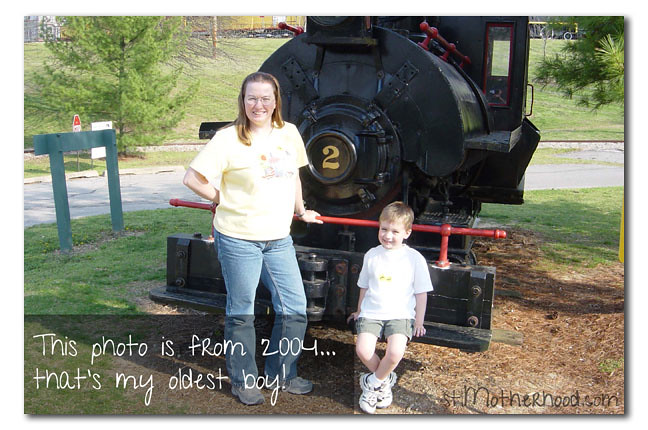 Normally I like to pull the freshest photos I have when I do a review–but this photo is just too cute. That’s my teenager, when he was 5. He was a big Thomas fan too. (I don’t know what was going on with my hair…I think I was growing out my bangs that year.) See, I told you we’re big fans of this place!

We’re posed on the Laclede-Christy, a tiny little engine that was used in a local clay plant in the early 20th century. The museum has it set up in the upper parking lot and kids are welcome to climb aboard and ring the bell. It’s a little out of the way if you’ve parked in the new lot, but it’s well worth the stroll. 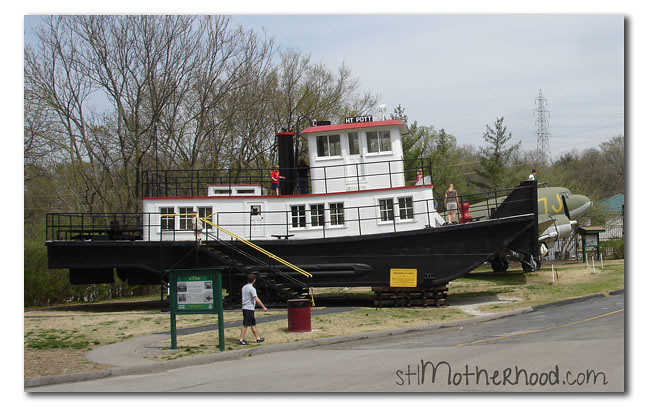 Near the Laclede-Christy (and the old front entrance) is a tug boat and a C-47A plane with WWII markings. You can climb aboard the boat, but just walk around the plane. I’m told the museum would like to move the boat next to the new visitor’s center and build a little pond around it someday. 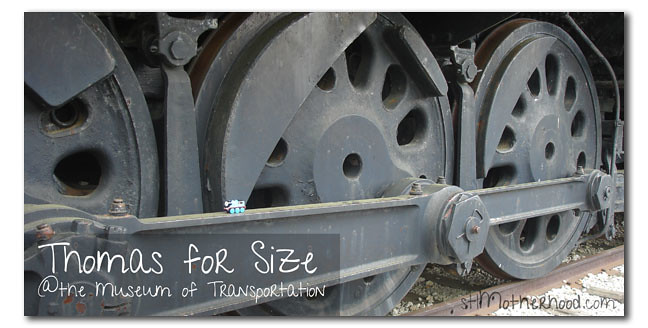 The Transportation Museum has more trains than you can shake a stick at, and most of them are outside. Some of the older, more delicate ones are tucked under a shed, but you can still walk around them. The museum is run by the St. Louis County Parks Department, so they don’t have the budget to restore all the trains. They work on them as they can and try to keep the rest from just rusting apart. 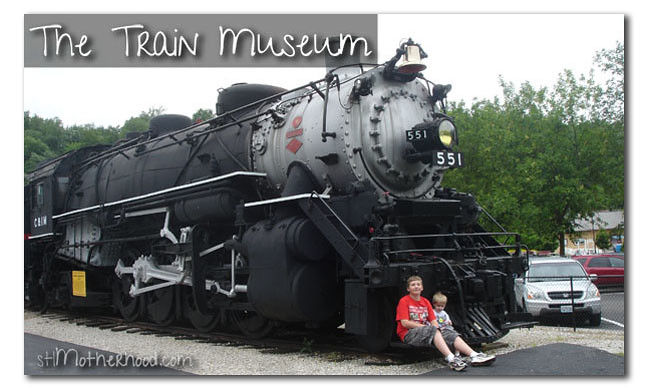 The train museum, errr, the Transportation Museum has plenty of engines, box cars, passenger cars, stock cars and cabooses (cabice?) to explore, inside and out! Two of the big engines have steps to the cabs so you can play engineer and ring the bell. The caboose next to the visitor’s center is completely restored and stocked with museum props, so it’s just like stepping back in time. The rest? Well, watch your kid’s fingers and use common sense. 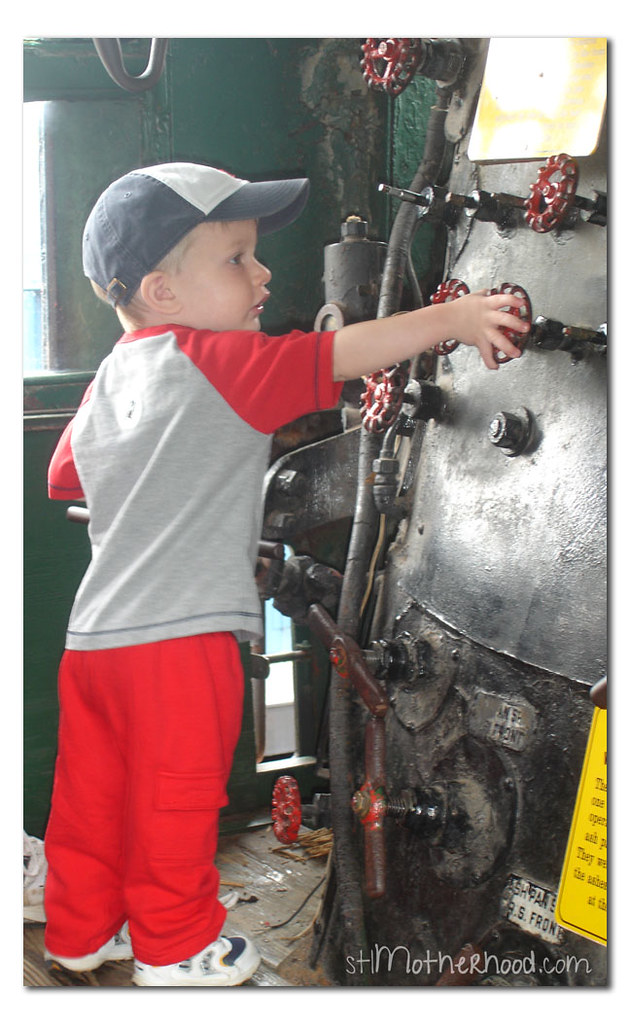 The Transportation Museum is located at 2967 Barrett Station Road. It’s between Kirkwood and Valley Park, right off Dougherty Ferry Road and near Hwy 270.

Remember I mentioned the membership? Let me break that down for you. If you’re a family of four it will cost you $16 to $32 to visit the Transportation Museum, depending on the ages of your kids. ($8 for adults, $5 for kids under 13, under 3 free). Train rides will add $16 to your visit, plus $2 for anyone that wants to go into the Creation Station. Whew, that adds up!

A membership starts at $40, but that level just gets you into the museum. For a $60 Conductor level membership, you get unlimited admission for six people at a time, plus 35 Choo Choo Choose Stamps that are good for the Creation Station and train rides. You also get a discount at the gift shop, a break on birthday parties and invites to special events.

The Conductor membership takes care of 8 visits (Creation Station and train rides) if it’s just a parent and one pre-schooler, or four visits if you bring a family of four. Or more if you skip the Creation station, or have a baby under 3. Do the math, it works out.

There’s higher levels of membership if you need more passes or just really want to support the museum. Hey, join at the $1000 level and they give you a brick!