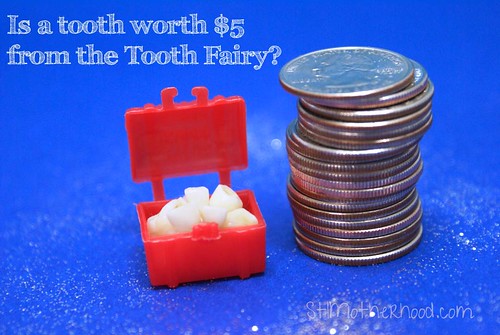 So how much is a tooth worth?

It’s a common question for moms pondering one of their unexpected jobs: the role of Tooth Fairy. Oddly enough, Visa has some advice for you. No, they’re not asking you to charge it. (Whew!) Visa came out with a free calculator to figure out the price of a Tooth Fairy visit based on a survey they did of 3,000 people around the country this July.

What did they find?

American children are receiving an average of $3.70 per lost tooth! Visa’s has been doing this survey for a while, so they also have stats on previous years. Last year a tooth was averaging three bucks and just $2.60 in 2011.

According to the survey, Midwestern kids have the cheapest teeth at $3.30, while

Northeastern kids are bringing in an average of $4.10.

And here’s an odd fact for you–the Tooth Fairy actually leaves LESS money (on average) in households with older parents or higher incomes. Dads leave about a dollar more than moms, and parents 18 to 24 give the most when it’s Tooth Fairy time.

I ran my information through the calculator and found that I give the kids a wee bit more than the survey suggests. That’s because my Tooth Fairy normally tries to be clever by leaving one of each coin she can get her hands on: a dollar coin, a quarter, a dime, a nickle and a shiny penny.  (That’s a $1.41.)

Mitch lost his first upper tooth just last week and he pulled in $2 in coins–a golden dollar and a bunch of dimes.

The calculator pegs me at a dollar per tooth cheapskate. So who are the big spenders? Young parents, who are handing out crisp $5 bills. Geez!

Fun Fact #1: Yes, that’s my photo up at the top. Don’t tell Mitch, but I’ve kept all their teeth. Yeah, kinda gross, but what are you supposed to do with them?

Fun Fact #2: Ryan was cleaning his room one day this summer (shocker) and he asked if he could trade in his Tooth Fairy coins–he still had eight bucks in dollar coins! Did I mention he’s a freshman in high school this year?