About four years ago I visited Brookdale Farms with Mitch and his scout buddies. Then I wrote this review which wasn’t, er, terribly flattering. I’d like to update that review after a visit last weekend. Now, I could just delete this review and replace it, but that could lead to broken links (shudder) and no blogger worth her salt leaves broken links. I’m happy to report that Brookdale Farms has made quite a few improvements to their Halloween set up! I’m going to add notations to this review in GREEN, so read on and see what’s changed. 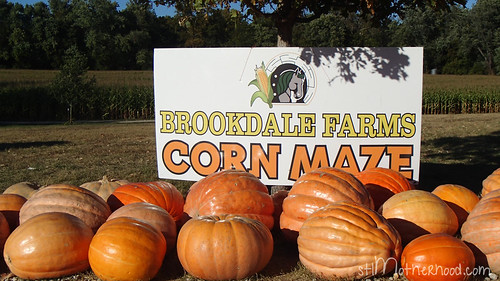 The Farm still says they have a pumpkin patch and this year it looks like they put in a bigger crop. Not sure how long it will last, but hey, they’re trying.

This weekend I took the boys to Brookdale Farms, which is known for it’s huge corn mazes, one haunted, one not. During the day it’s a family place, at night they haunt it up and it becomes Red’s Cornfield Massacre. I have no idea how good the haunted venue is–if you’ve gone, let me know in the comments if it’s worth visiting. I don’t have anything against Red’s, I just don’t do scary. (We still don’t do scary.)

It’s been a while since I’ve visited Brookdale, so I was excited to hear they added a pumpkin patch this year. Like I said, looks like they may have planted more in 2017.

We were there with Mitch’s Cub Scouts on a Go See It (that’s a Tiger field trip). We met up, the kids did a little badge work and we checked in. I’ll give Brookdale some credit here– the zip line and the inflatable slide were a HUGE hit with the boys. The inflatable on the farm in 2017 is way bigger. 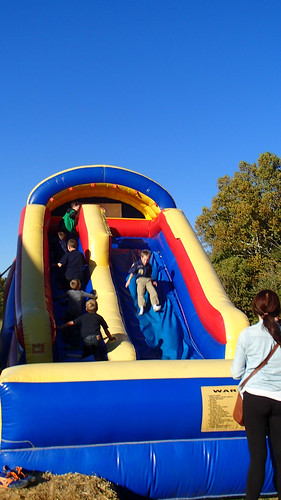 However, if you go, remember to spot your own kid on the zipline–a couple of our boys had, shall we say, less than graceful landings, before a scout dad stepped up and started catching. The zip line is for people under 140 pounds and is only a few feet up in the air. Pretty tame for a 10 year old, but most of our 6-year-olds never touched the ground until they let go of the handle bar.

There’s also a farm themed play area for little kids where you could play in corn like a sand box, see a draft horse, pet a camel and a couple other animals. They had a train ride (barrels cars pulled by an ATV) for kids and pony rides that are $2. Petting area has been moved to the big horse barn. Pony rides are now $5.

I visited the snack stand while we waited for a hayride. They had kettle corn, fresh donuts, funnel cakes and swarm of bees that was unfreaking believable.  The bees were crawling in and out of the soda fountain, which made me not really want to eat anything freshly prepared there. Even my teen agreed with me when I took a pass on the funnel cake. Granted, it was a warm day, so hopefully this cold snap will kill off the bees and they won’t terrorize future visitors. But it was nasty yesterday. I can understand having bees in the trash. I can understand if bees visit your soda can while you’re sitting in the picnic area. But bees in the kitchen is where I draw the line. Ewwww. Trash cans now have lids, didn’t see any bees.

The scouts were supposed to do a farm tour, but something happened there too and it didn’t come off. Thankfully the boys really didn’t care so long as they got to chase each around around the play area. We visited the corn maze after a while and that was a big hit. The kids led us around the maze for a long while, looking for ten silly jokes posted on signs, called “cornumdrums.” If you find them all, you get to enter a drawing for a grand prize. I think we found six before the moms got tired of walking in circles. 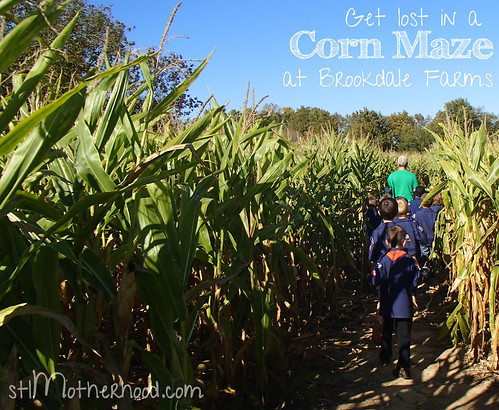 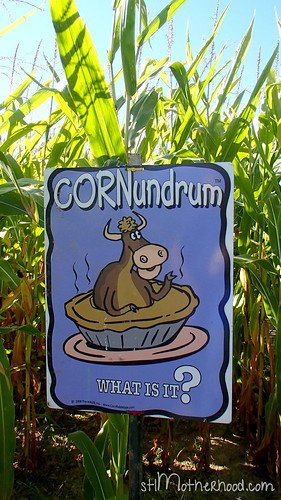 The hayride was nice–you have to take the hayride to get to the (now empty) pumpkin patch and the Pumpkin Chuckin area. The ride cuts through the woods a bit, no doubt part of the night time haunted hayride, and dropped us off in the pumpkin field. A staff worker there was very apologetic about the lack of pumpkins. 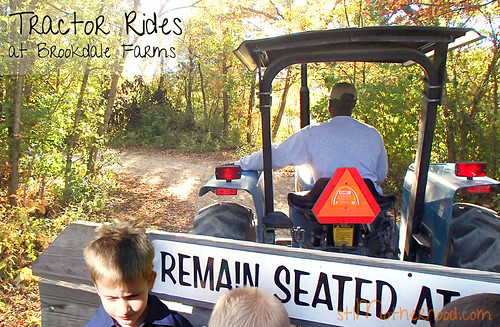 Up the hill are two slingshots, with mini pumpkins for ammo. It took some muscles to use, so we let Ryan do the chuckin’. Pumpkins are not included in admission, but I can’t recall what I paid. It was a less than a dollar a pumpkin. We got there at 4:45pm and there were only 20 or so pumpkins left, so I didn’t want to hog too many. (There are now 3 slingshots and a 4th short sling shot for little kids. They also added a corn cannon and pumpkin cannon. It’s $5 for the cannons, and we got 12 mini pumpkins for $10 in 2017)

There should have been a bounce house next to the sling shot, but they deflated it before we got there. The farm is open until 6pm for non-haunting, so I don’t know why they dropped it early. That’s was a bummer. (The bounce house is now next to the maze. It was up when we visited late on a Sunday evening.)