Skip to Content
48 shares
We recently took the kids on a weekend road trip to Kansas City to see the LEGOLAND Discovery Center. A massive LEGO playland is one of the few things that will make this mom book a hotel, pack up the kids and drive across the whole state for some fun. 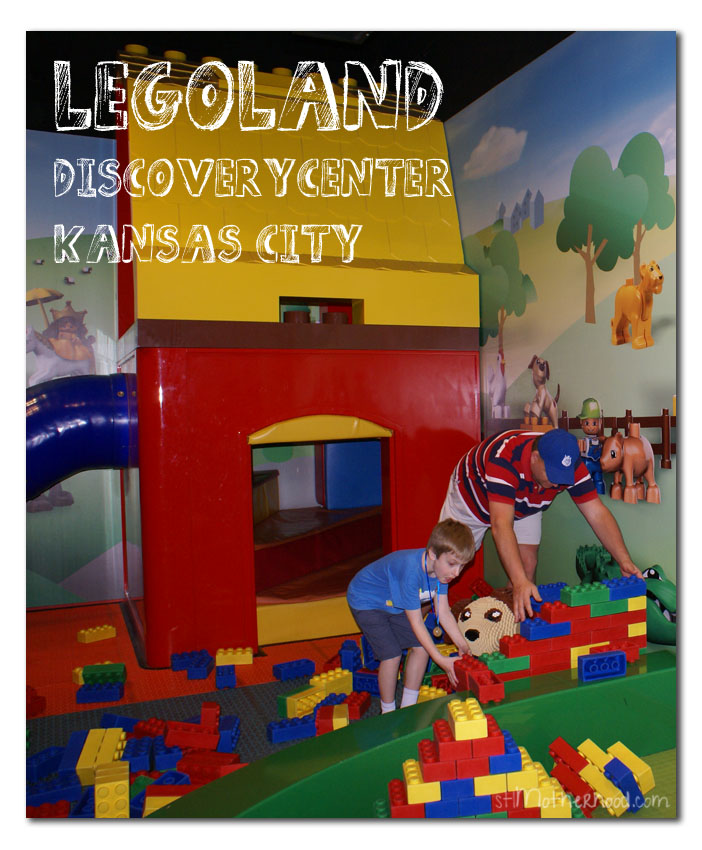 FYI: We received four free passes to review LEGOLAND, but the opinions here are mine–and the boys’–own.

A visit to a LEGOLAND Discovery Center is a bit like a trip to the Magic House in St. Louis. This place isn’t an amusement park, but rather a huge indoor LEGO play center. We took a couple hours to see and do everything.

A few tips before you go:
Some staff members at LEGOLAND carry minifigs to trade with the kids. We didn’t know about this, though there was a mention on the website (with no instructions). Pack a couple old minifigs when you go, there’s no limit on trading. 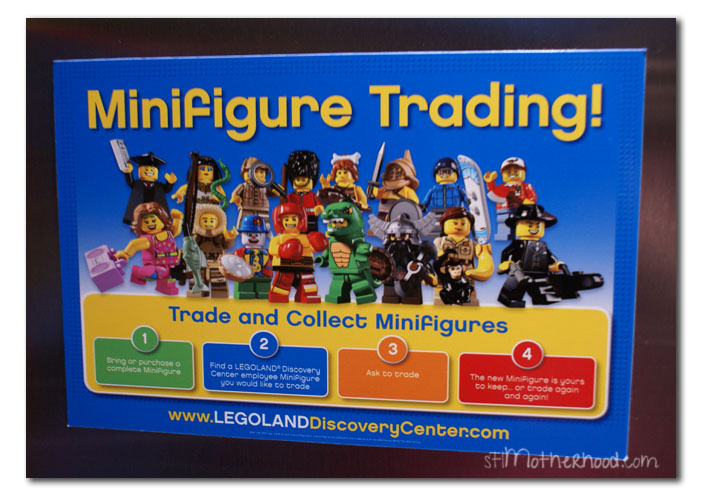 Ask about the activity pack when you get there! The gal who checked us in didn’t offer an activity pack, so my kids missed out. Another staffer did offer to find us one (they’re $4) but by that time I didn’t want to wait—my kids were ready to move on to the rides!

LEGOLAND Discovery has two amusement park rides—a shoot-the-bad-guys ride (ever do Buzzlight Year at Disney?) and a small scale spin-around-in-while-going-up-and-down ride. (Seriously, there must be names for these things.) 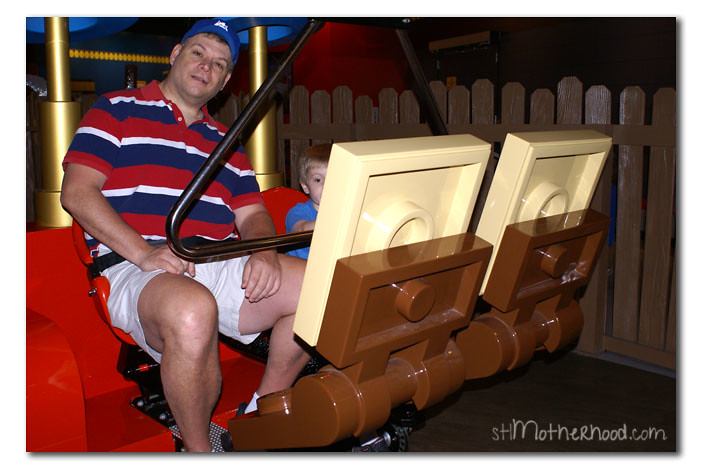 Kindom Quest was a great ride, we did it twice. Everyone piles into a car and grabs a pistol. You shoot the bad guys with a laser pointer in the gun. The cars go through one at time, pause at large projection screens with cartoons clips of LEGO bad guys, and drive by 3D stationary targets, like LEGO spiders. Not scary at all. Watch out, they’ll take your photo somewhere in the ride. I’d show you ours, but we looked so dorky we decided not to buy it.
Merlin’s Apprentice Ride was kinda lame but Mitch really liked it. (The photo above shows Mitch and his dad on Merlins Apprentice.) It was a bit like the Dumbo ride at Disney, but smaller. If your kids are tall enough to ride on their own…let them. Sorry, you’ll have to ride with your kid if they’re under 51 inches.
The 4D movie was out of order on our visit. Too bad, it looked fun. 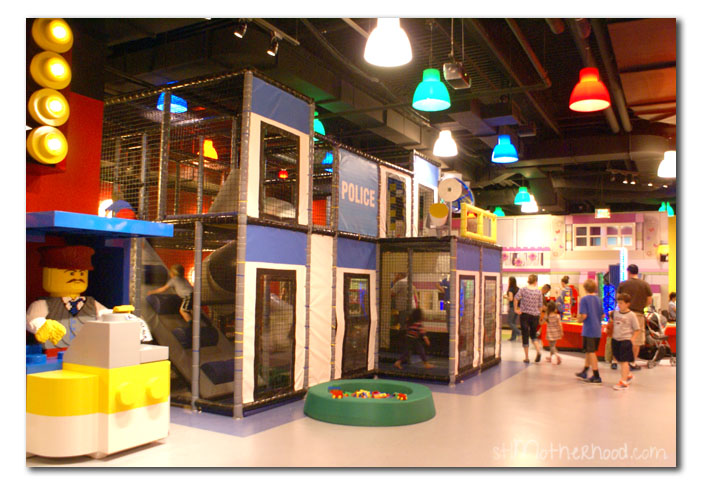 The soft play area gets 2 thumbs up from Mitch. It’s a large indoor playland with a LEGO City theme. It’s a great place to run and get the wiggles out.
The LEGO Friends area seemed like a big hit with the girls, and was basically a life sized doll house to play in and build with pink and purple blocks.

Race Car test track: it was a challenge finding the right parts, but all my guys (including dad) had fun building a LEGO race car. Hint: roam around the area and look for abandoned cars for spare parts! I found a lot of good parts at the end of the final track—a lot of cars explode on impact and the kids just leave the parts as they head to the next exhibit.
Duplo area: full of soft LEGO bricks the size of real bricks. Don’t let the Duplo name fool you, bigger kids will want to play here too. 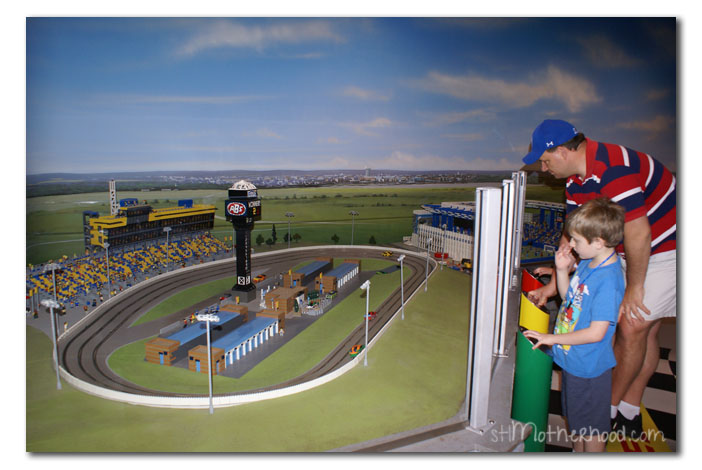 Mini City: this area was really fun, despite not being familiar with Kansas City. The little details were hilarious (like a street blocked off by police so the firemen could rescue a cat), and the room cycles through day and night so you can see the city light up. Look for interactive buttons–Mitch was able to start a concert and race a LEGO slot car.
LEGO Café: seemed a bit over priced, but that’s typical for these places. They have sandwiches, chips, cookies. The café has wifi, but you’ll have to ask for the password from the counter. 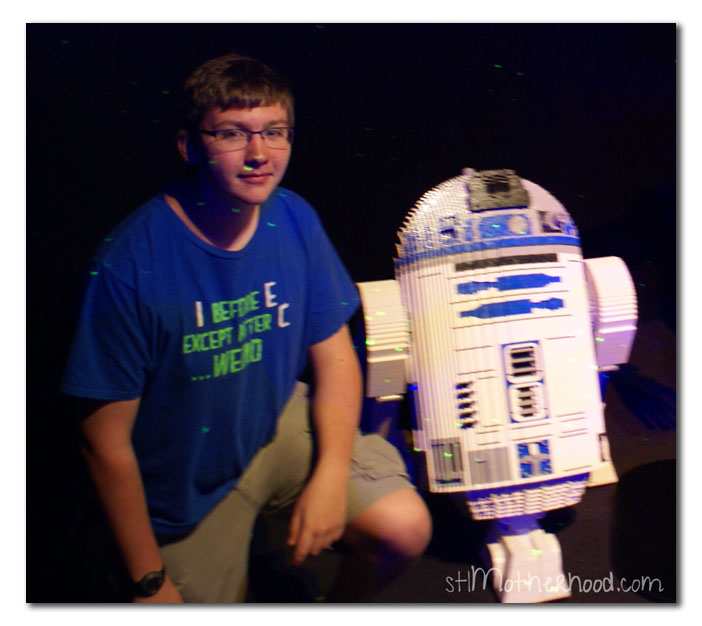 The Star Wars area focused on the later trilogy: lots of clones and scenes with moving parts. Don’t miss the holographic light saber duel! (I’m not sure if this is a permanent display or not. It’s not on the map.)
Other stuff:
We took a pass on the Master Builder area. It looked a lot like the free mini figure build they do at our local mall LEGO shop for free. But here they’re going to charge you an extra $5 to keep it. Besides, Mitch had already done the kit they were offering that day.
There’s a large LEGO store here—it’s the last stop on your tour. The prices looked like ordinary retail, but there was a small discount for season ticket holders. They aren’t part of the LEGO VIP program, so you’re not going to pick up points on your LEGO card if you shop here.
So what did everyone think of LEGOLAND Kansas City? To be truthful, I was a little bored by the end, but as a mom there was a lot of sitting on the sidelines and watching. Sure, you can get in there and build, but when your kid hits the softplay area you just need to find a bench for a while. But what’s important here is…what did the kids think?
Mitch had a blast and would go back in a heartbeat. If we lived in Kansas City, we’d have a season pass right now. Ryan, who’s 15, agreed that LEGOLAND was worth the trip and he had fun too. And he’s pretty honest about these things. He only pulled out his iPad once, and that was when we let Mitch hit the soft play area–no big brother’s allowed in there!
LEGOLAND Discovery Center Kansas City is $18 per person, and free for little ones under 2. There’s a 15% discount if you buy your tickets online.
They are open 10am to 9pm on Friday and Saturday (the doors close at 7pm) and from 10am to 7pm (doors close at 5pm) Sunday to Thursday.
Plan at least two hours for your visit.
During our visit, we also stopped by Sea Life aquarium, which is right next door. If you’re coming from out of town like we were, you definitely want to do both! We had a big breakfast, hit the aquarium for an hour then LEGOLAND for a bit over two hours. Then walked over to Crown Plaza for a late lunch. It was a perfect day!