We love to play with anything that glows in the dark, especially during summer nights when the kids can stay up late. Glow sticks, light up balloons, glow in the dark paint. 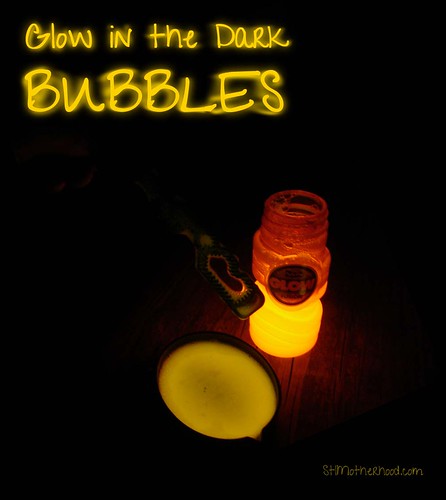 Well, except for the glow in the dark paint, that didn’t really work. I’ll have to write a post on that later.

When I came across Glow Fusion Bubbles (by Miracle Bubbles) I was excited. Would they really work? How cool would it be?

I bought a set with a battery operated bubble gun, because, you know, I have boys. The gun is not pictured here because the gun didn’t make it to test night.

Let me rephrase that. The gun was a piece of crap. It looked super  cool and actually blew some decent bubbles during the day. However the LED light did not work when I put real batteries into it–it lit up with the demo button batteries, which were not strong enough to power the gun’s pump and fan. So we could have a light up toy gun or a unlit bubble gun. What’s the point in that?

I took the first gun back and swapped it for another bubble gun. This one ALSO didn’t work (same problem). I gave it to my husband to see if there was a wire to jiggle or whatever manly thing dads do to make toys work. The screw was jammed, and it stripped when he tried to open it. After prying it open, it wouldn’t close.

I had an awkward conversation with my six-year-old explaining that daddy broke his gun. I would have liked to take it back again, but by this point the gun was in several pieces.

We took the bubble solution camping. The fine print in the directions recommend using the bubbles in a completely dark environment. Between the street lights and the security lights, it’s never really dark in suburbia. I figured a camp ground in the boonies would get pretty dang dark.

The Glow Fusion bubbles comes in three parts: A bottle of bubble solution and two packets of mystery glow gunk. You pour  Part A and Part B into the bottle and wait for the magic.

The good news: It Worked!

When the second packet of chemicals hit the solution it lit up like a Nuka Cola (that’s a Fallout reference, go ask a teenager). We got an IMPRESSIVE glow from the bottle and it looked AWESOME as we poured it into a dish for bubble blowing! It looked super cool on the bubble wand!

And then…disappointment. The bubbles themselves did not glow. The solution is so thin on a bubble that the glow is lost. Perhaps they would glow if you were in the bottom of a mine shaft? I don’t think a mom would feel safe having her kids play with bubbles in a yard dark enough for this stuff to really work.

I’ve read reviews for these bubbles claiming they work with the gun. I think they were seeing the LED light on the gun reflected on the bubbles. The only “glow” we saw was from the bubbles picking up ambient light from the bath house 100 yards away.

We tested a bottle of normal bubbles and they picked up the same ambient light.

So, yes, the Glow Fusion bubble solution does glow…in the bottle. It’s fun to play with a puddle of glowing goo, just don’t expect the bubbles to light up on their own.

The glow also doesn’t last forever. The packaging suggests using the bubbles within 30 minutes. They come in small bottles, so this is not difficult. But you’re not going to save these bubbles for use another night.