I’d like you to meet the four-legged member of our family, Mousse. He’s a rescue dog that we scoured the internet for and drove 100 miles to pick up in Columbia, at the Humane Society shelter. Actually, it was more like 400 miles because we had to drive out to Columbia twice–once to look him over and again to pick him up when he was cleared for adoption. I would not trade this dog for million dollars. 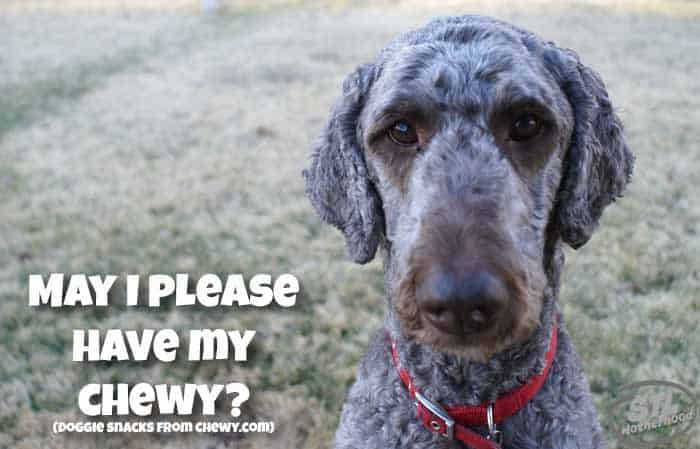 So my dog’s name is a pun. That’s normal right? See when we got him, he was a just a pup and pure brown. He was all legs and fur so we decided to call him Moose. But he’s a Standard Poodle (so we’re told) and we started him off with a foofy poodle cut…so Chocolate Mousse became his name. Here’s a picture of him at the shelter a couple years ago and after his first trip to the groomer. 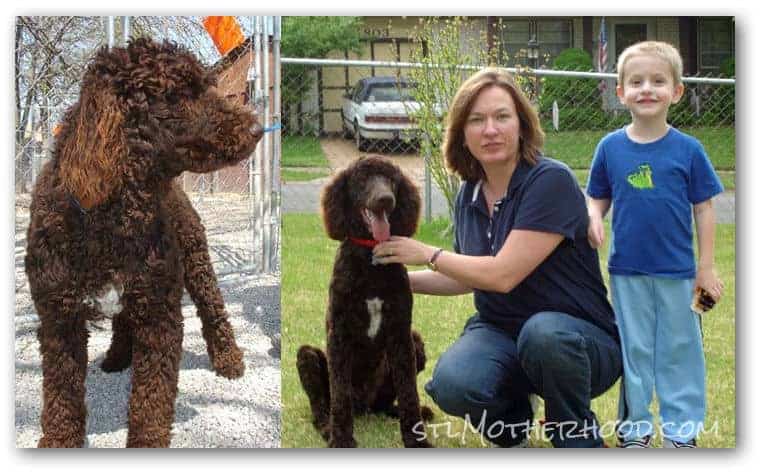 We ditched the foofy poodle cut when we decided it just didn’t suit his personality. He’s a good jogging partner, a squirrel chaser and a perfect couch snuggler. So we gave him a plain ol’ dog cut.

However, he’s still quite the fussy poodle when it comes to his diet. He’s allergic to wheat and corn–one bite of Mac & Cheese from the kid’s plate and we’re all suffering from his gastrointestinal distress. Oh, and don’t even think of serving him plain (albeit 6 pure ingredient) dog kibble. He needs something special on his food before he’ll touch it. Cheese. Leftover hamburger. Gravy. Bacon. You get the idea.

When it comes to treats, I almost gave up on pleasing him. Dry biscuits don’t cut it. And he gets bored with most other “meaty” treats quickly. He usually sniffs a dog treat and looks at you like he’s been offered fish heads. Wait, I take that back. He’d probably eat the fish heads. Raw hides are good treats, but eewww, so slobbery. The dog likes meat, but who wants to walk around with sausages in their pocket?

So when Chewy.com asked if Mousse would like to review some dog treats for them my reply was a bit tentative. Sure. We’ll try them. But I can’t guarantee he’ll eat them. 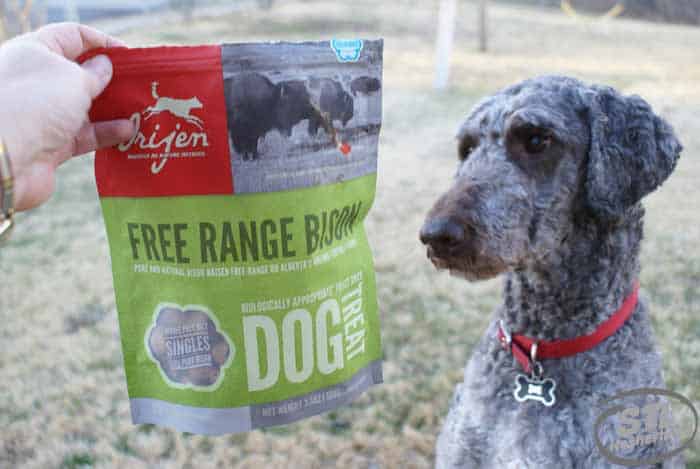 They sent a package of Orijen Bison treats. These are gourmet snacks fit for a king. Or a picky poodle. The ones he tried are Free Range Bison–and he gobbled them up like poodle candy.

The Orijen people are serious about their pet treats. They use 100% fresh meat, locally sourced and prepped in their own kitchens. They’re up in Canada so locally sourced means this bag of treats was once wandering around a ranch in Alberta. And though they say their pet foods are “fit for human consumption” they also make them fit for your pet’s special dietary needs. So the whole critter goes in: meat, organs, cartilage and marrow. Yeah, these treats are all your’s doggie.

Sound interesting? Chewy.com has these treats and whole bunch more. Give them a try. Your dog will love you.

Still photos don’t really cut it when you’re talking dog treats, so here’s a little video I captured on my phone. Mousse loooooves these treats.