St. Louis–or rather, a good chunk of the metro area–will be in direct path of the 2017 Total Solar Eclipse! But don’t worry if you aren’t in that 70 mile sliver of totality, you’ll still get a very awesome spectacle. 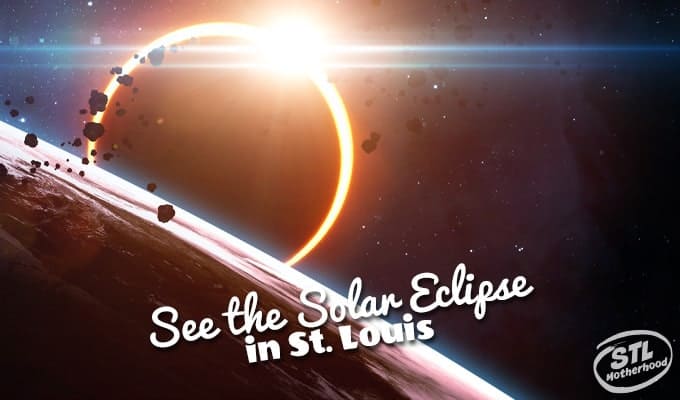 The best resource for all things eclipse is NASA and I’ve spent the morning digging through their resources to find the best bits of information regular non-scientist parent like ourselves can understand.

Where Can I View the Eclipse?

(Psst: Looking for a list of events? I have one here.)

You’ve probably seen one of those maps with the lines cutting diagonally through the country, right? And if you’re in North County, St. Charles or St. Peters you probably thought, dang it, we’re gonna miss the whole thing.

NASA has an interactive map they’ve set up with the help of Google here. Click it, find your location and you can see how much of the eclipse you’ll see from your house or work–it’s on a Monday after all. 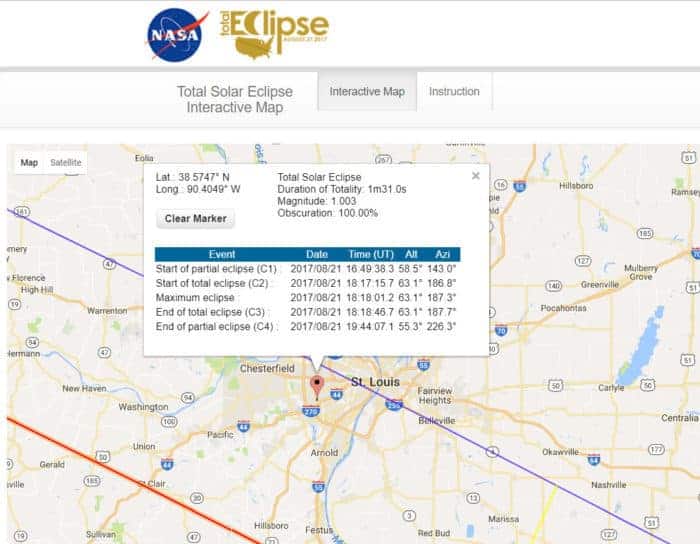 When you click on the map, you’ll be given all kinds of data. Here’s how NASA explains the map, which I set to point at the Magic House in Kirkwood.

When you click on the map a red marker is added and a popup window opens giving the Eclipse Circumstances calculated for that location. The predictions in the popup window can be divided into two sections.

In the top part of the window, the decimal Latitude and Longitude of the marker are given. The Eclipse Type (either total, annular or partial) seen from that position is given. The Duration of Totality (or Duration of Annularity) lists the length of the total (or annular) phase in minutes and seconds. The Eclipse Magnitude is the fraction of the Sun’s diameter eclipsed. The Eclipse Obscuration is the fraction of the Sun’s area eclipsed.

The bottom part of the window consists of a table listing the times for important stages of the eclipse. The Event column lists eclipse phase, followed by the date and time (both in Universal Time). Finally, the Altitude and Azimuth of the Sun is given for each event. The altitude is measured from the horizon (0Â°) to the zenith (90Â°). The azimuth is measured from due North and rotating eastward (North = 0Â°, East = 90Â°, South = 180Â°, and West = 270Â°).

When Can I See the Eclipse?

I’m going to admit, not all of this data makes sense to me. BUT the thing to pay attention to is the time, which is in UT. Converted to Central, the eclipse is going to start around 11:45 am  in our area, go total coverage at 1:17pm and be over by 2:45pm. The moon’s shadow is moving fast, so you’ll want to visit that map and find your exact times. 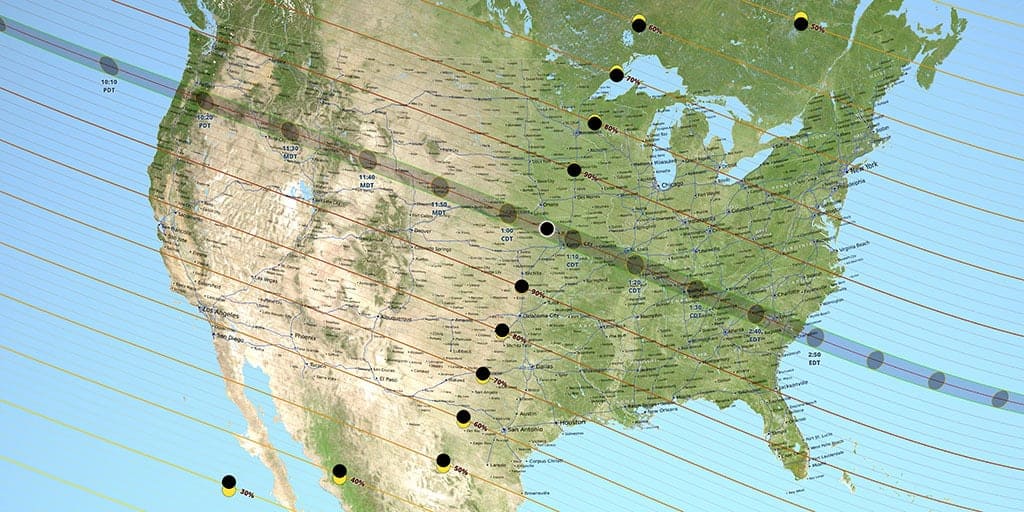 The map will also tell you how long the total eclipse will happen for your location. The closer you are to the RED LINE, the closer you are to the middle of the moon’s shadow and the MORE time you’ll have when the moon completely covers the sun. At the Magic House, they’ll get one minute and 31 seconds. From my backyard, I’ll get one minute and 56 seconds. I’m only a 15 minute drive from the Magic House, but I’ll get 25 seconds more eclipse! If you manage to get on the red line, like in St. Clair or DeSoto, you’ll get the maximum 2 minutes and 40 seconds. 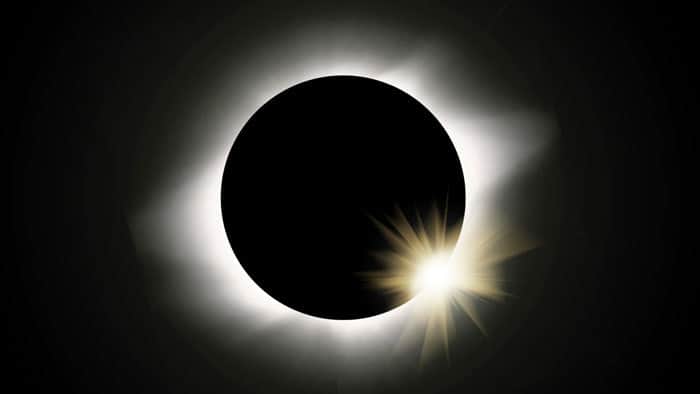 So What’s a Total Eclipse?

An eclipse is when the moon blocks our view of the sun, casting it’s shadow on Earth. If you’re in the path of totality your view of the sun will be COMPLETELY blocked. It will get darker, the temperature will drop and at the moment of eclipse you can safely look at the sun, because it’s totally covered. Just remember, it’s only for the minute or too, so don’t get crazy. Keep your glasses handy.

If you’re just outside that path, like in downtown St. Louis or North County, you’ll still get quite a show with about 99% of the sun covered during the eclipse.

NASA has a really neat web app set up to give you a preview of the eclipse. Get NASA Eyes here and plug in your location. 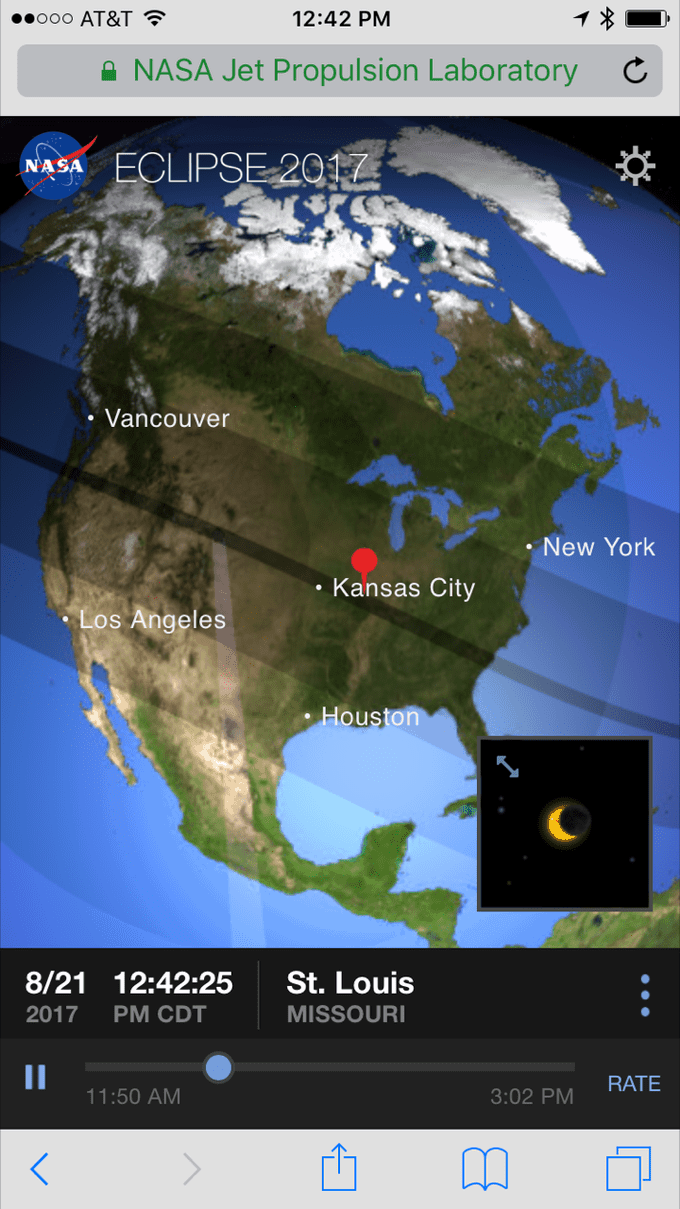 Should I take my Kids out of School?

Now here’s a tough one. As a teacher’s daughter I have to say no, don’t take your kids out of school. But. BUT…

Do check with your school and see what they’re planning. This is a once and a lifetime event happening in our backyard, so I’m sure most of the area’s science teachers are doing a happy dance right now and planning some awesome lessons. I’ve contacted my own district, Rockwood, and was assured that they were buying glasses for all the students so they can view the eclipse as part of their science lessons. They’re also planning lots of science activities around the event–in fact, Mitch told me they were already talking about it last school year.

But not all the districts in our area are planning for a science fest. Some are treating it like a dangerous weather event and others are just worried about all the traffic that will clog up their rural roads. The news is reports that Edwardsville, Dunklin, Windsor, and St. Clair are taking the day off.

But isn’t the Eclipse Dangerous??

I’ve been hearing some weird ideas about the eclipse being dangerous. It’s not anymore dangerous than any other day. Think of it…do you look directly at the sun? NO because it’s too freaking bright. The only reason everyone is hammering safety for eclipse viewing is because the sun is doing something interesting and we want to catch a glimpse. You can’t EVER look at the sun, even when most of it is covered by the moon’s shadow. The only time it’s safe to take a peek is during that tiny window during total eclipse.

NASA has a whole page on Eclipse Safety, so check it out here.

Basically, get some glasses! I purchased glasses for my whole family from Lowes–who’d expect a hardware store to have eclipse glasses? Some viewing events will have free glasses and you might still be able to get a pair online, but they’re selling out fast! You can buy a set from the Missouri State Parks Department for just a buck. You should also be able to find them at the Saint Louis Science Center gift shops and at a few St. Louis County parks. Here’s a list of places to go. 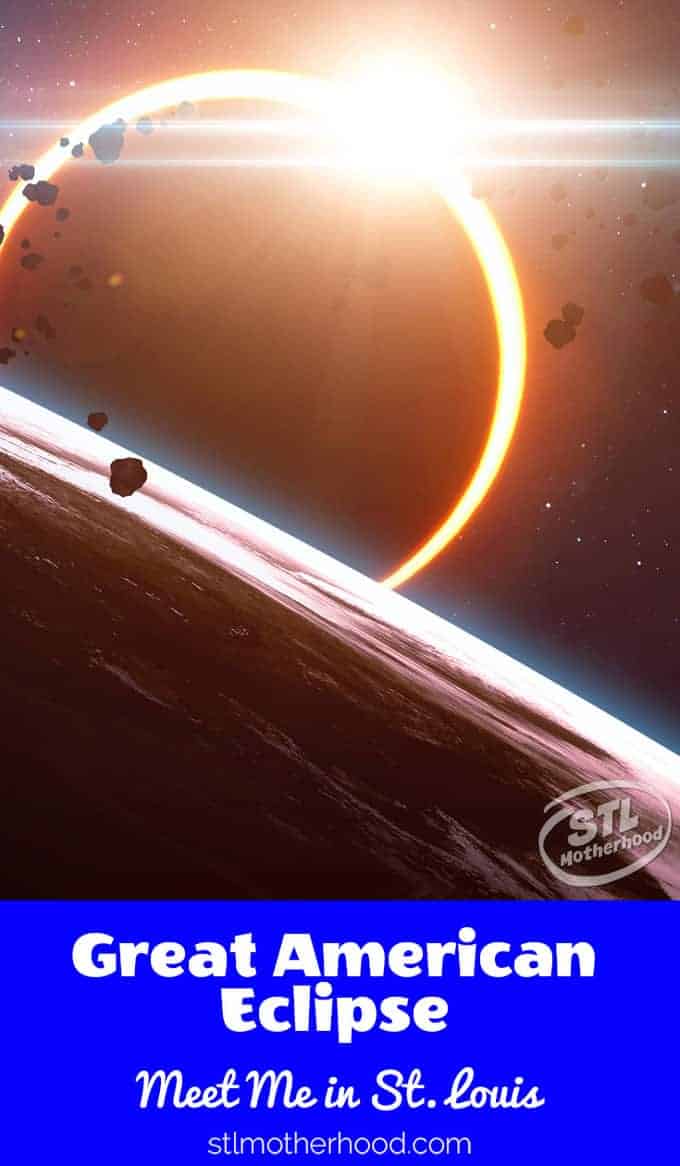