Something weird is going on. I haven’t been able to find white, clear or glitter glue…since January.

See, Mitch came home with a little container of DIY slime he made during science class. He wanted to make more, so I put the ingredients on my shopping list. We’ve made slime before–it’s a great STEM experiment–so I didn’t think much of it.

The weird thing was…I couldn’t find ANY glue! At first I shrugged it off as part of Walmart’s weird seasonal stocking methods, like how they stock swim suits in winter and snow boots in summer.

Then I remembered our 4th grade teachers asking parents to send in any extra glue we might be hording, because they were running out. I imagined all the moms in our building adding glue to their shopping list and wiping out the local supply.

But every time I hit the store, I would swing by the craft aisle only to find a sad empty spot where school glue should be. Oh, there’s plenty of glue sticks, but none of the liquid stuff. I started looking at Target and Michael’s. No glue there either. 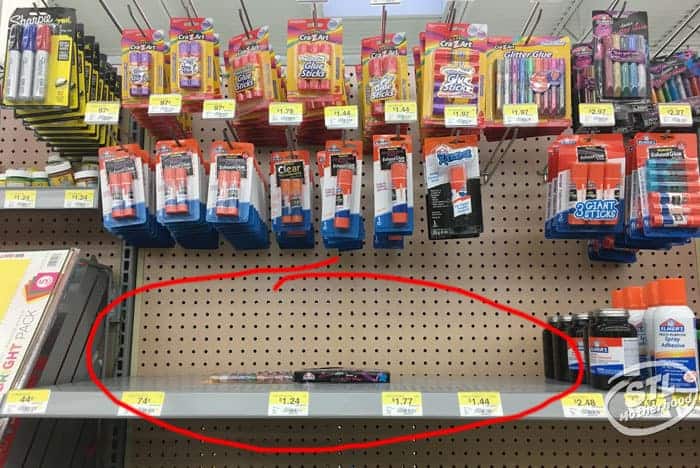 Around here a bottle of glue lasts for years. Mitch loves to craft with paper, but he hates waiting for things to dry. So he uses tape–lots and lots of tape.  I still have extra glue sticks from back-to-school shopping in 2012.

So that was it. Slime. I’ve heard that Pinterest can make a project go so viral that stores run out of oddball ingredients. I never thought that something as common as glue could have a shortage.

I stopped by Michael’s to get some glue. I figured if they were the real “slime headquarters” they would be on top of this trend and all stocked up.

But there was no glue. 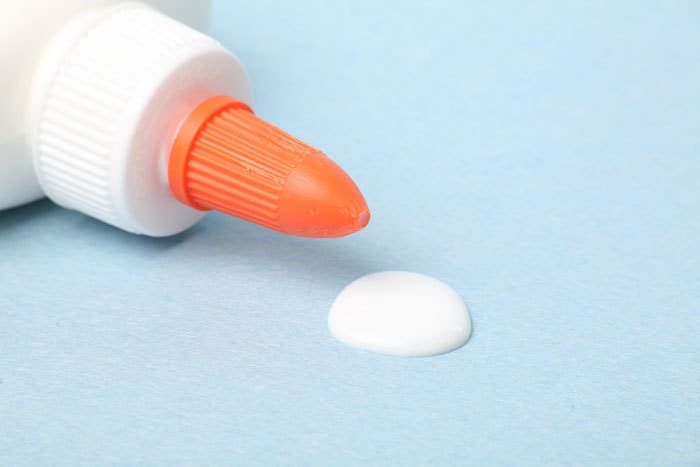 I asked a clerk where the glue was hiding, she sighed heavily and said that an “emergency shipment” was expected soon.

People Magazine ran an article about the slime fad last month. It would seem I’m not the only one who can’t find glue…there are shortages all over the country! Elmer’s is selling twice as much glue as normal and is having to increase their production. Heck, the Wall Street Journal profiled a teenage girl who sells slime to her friends. This is big people. BIG.

And months after the fad took hold, we’re still having problems getting our hands on glue. Fox2 News just ran a piece about the continuing shortage.

If you STILL can’t find glue at your local store, you can always order it. Amazon seems to keep it in stock, and they carry gallon sized jugs, too! (FYI, that’s an affiliate.) 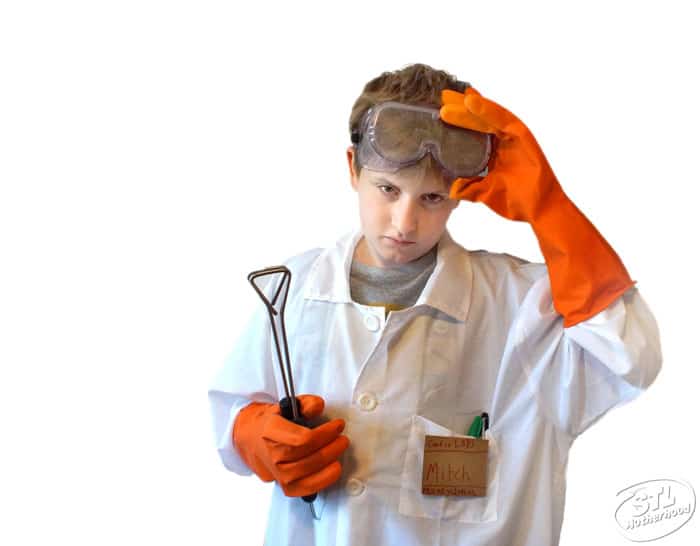 And naturally, we can’t have a fun fad without someone freaking out that it’s dangerous to children. Some bloggers are trying to scare everyone about the classic slime recipe, which calls for Borax. Borax is a natural mineral that’s used as a laundry booster, and yes, if you EAT a big handful you’ll get sick and maybe even die. But you don’t chug Tide or Dawn, do you? Snopes has dug into the facts, have a look.

But on the other hand, there HAVE been a few cases of kids having bad skin reactions after playing with classic slime. If you don’t want to risk it, then by all means, try the baking soda-saline recipe. I’d hate to find out the hard way that my kid is the one who’s allergic to Borax. 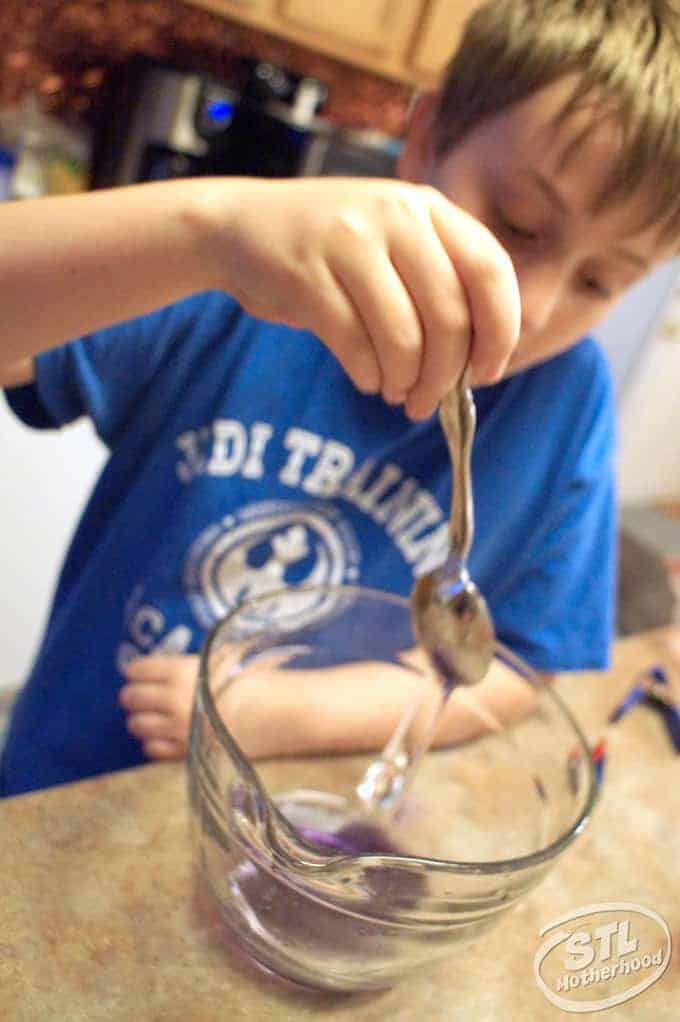 Classic Slime is pretty easy. Here’s how to make it!

You’ll need Borax, Elmer’s Glue (white or clear), food color and water. (Amazon even sells a Slime Essential Pack, isn’t that handy?) Some people like to use Popsicle sticks and plastic bowls to make their slime, but I go ahead and use glass bowls and real spoons–it washes off just fine.

Stir a teaspoon of Borax into cup of warm water.

Mix your glue with water at a 1 to 2 ratio in a large bowl. So, if you have a half cup of glue, use a whole cup of water. Or if you use a bottle of glue, add two bottles of water. It doesn’t need to be an exact measurement.

Stir the glue and water together. Add a drop of food color and stir. Like the color? Great! Want it darker…add more!

Here’s where making Slime is more art than science: add a splash of diluted Borax to your slime and stir. It should IMMEDIATELY congeal into slime. Keep adding small amounts of Borax solution to the glue until all the glue turns to a squishy, gooey slime.

Remove the slime from the bowl and start squishing it! If it’s too sticky, try handling it for a minute or too first. If it’s STILL too sticky, then put it back in the bowl and add a tiny bit more Borax solution.

Caution (and a little science) Borax is the catalyst in this recipe and you only need a little. If you add TOO MUCH Borax you will get a solid. It’s like baking cookies–once you burn them, you can’t uncook them.

If you don’t want to mess with Borax (I’m not going to judge) there’s a few other recipes you can try.

Michaels has a kid friendly recipe that uses clear glue and baking soda. Mitch and I made this slime didn’t like the stickiness. But go ahead and give it shot!

Here’s a recipe from Elmer’s. I haven’t tried it yet, but these guys should know, right? 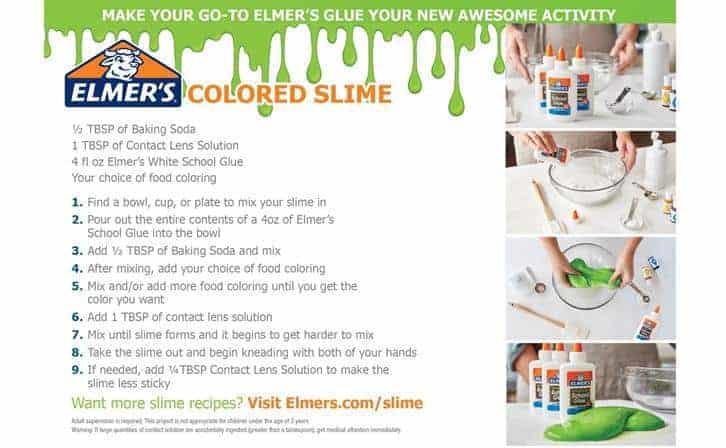 Glitter really makes slime special! I’ve had fun adding big chunky glitter and sequins to our slime. Whatever you add, save it for the last step. I like to spread the slime out on the counter and sprinkle it will glitter, then fold it in. Once the glitter is in the middle of the slime, knead and stretch until you like it.

Slime is pretty shelf stable, so there’s no need to refrigerate it. It WILL dry out, so keep your slime in a plastic bag or Tuperware type container. If your slime starts to dry out and get thicker, you can try reviving it by adding a more water. Just put the slime in a bowl, add warm water and squish it around. You can’t add too much water at this point–just drain any water that doesn’t get absorbed. 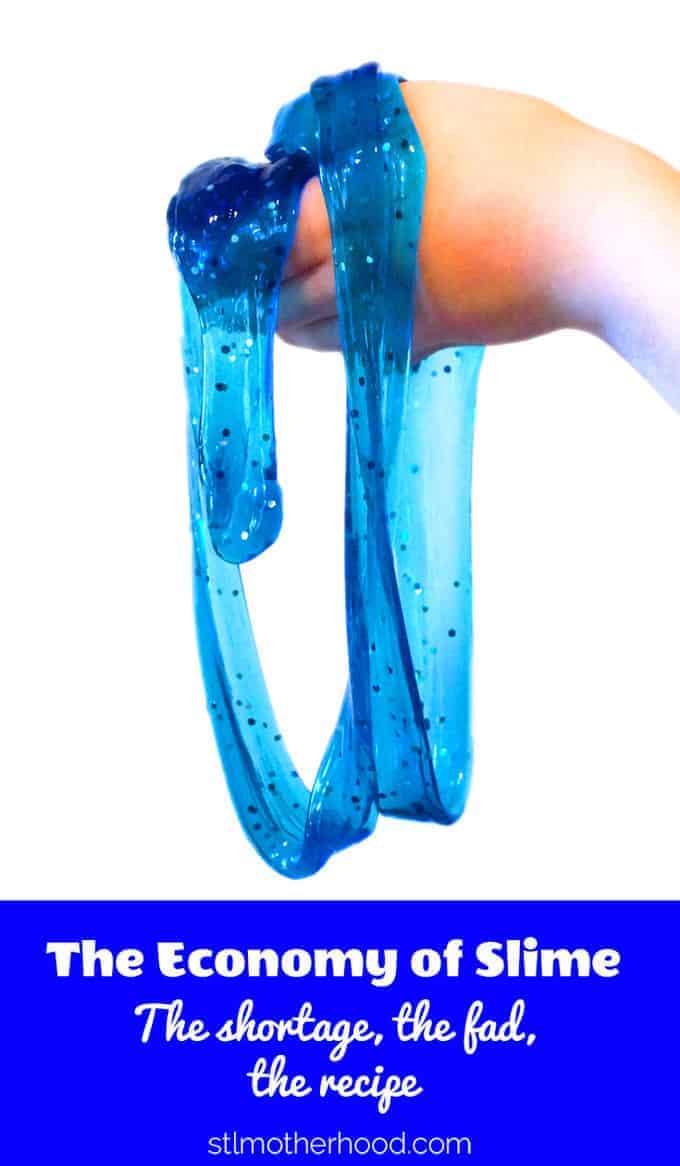